Softmax Activation Function: Everything You Need to Know 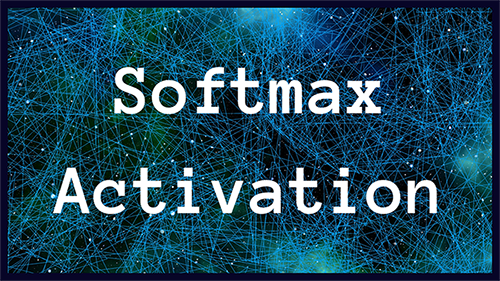 The softmax activation function transforms the raw outputs of the neural network into a vector of probabilities, essentially a probability distribution over the input classes. Consider a multiclass classification problem with N classes. The softmax activation returns an output vector that is N entries long, with the entry at index i corresponding to the probability of a particular input belonging to the class i.

Finally, you’ll learn the mathematical formulation of the softmax function and implement it in Python.

Let’s consider the following example: You’re given a dataset containing images of pandas, seals, and ducks. You’d like to train a neural network to predict whether a previously unseen image is that of a seal, a panda, or a duck.

Notice how the input class labels below are one-hot encoded, and the classes are mutually exclusive. In this context, mutual exclusivity means that a given image can only be one of {seal, panda, duck} at a time. 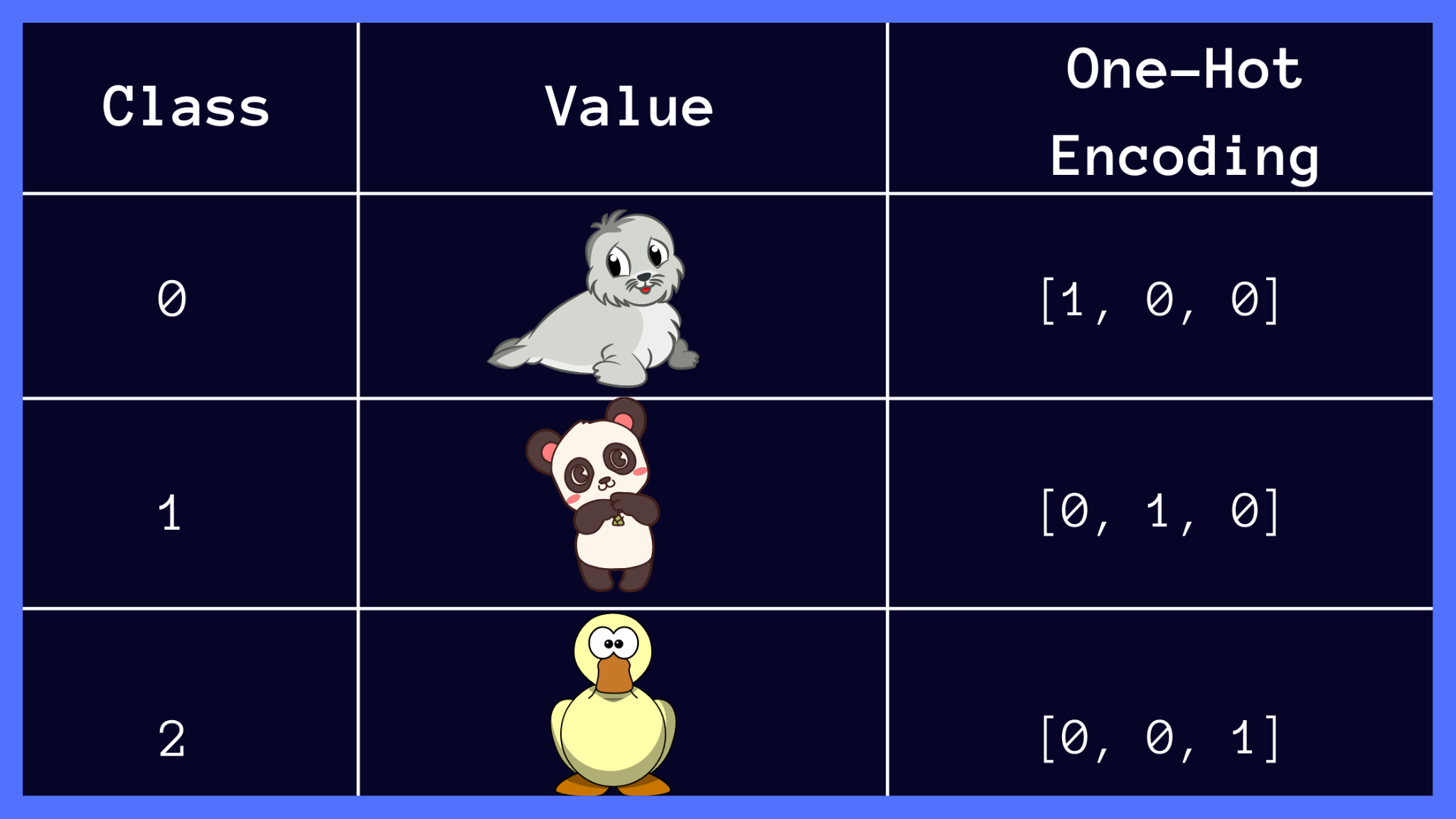 Can You Use Sigmoid or Argmax Activations Instead?

In this section, you’ll learn why the sigmoid and argmax functions are not the optimal choices for the output layer in a multiclass classification problem.

Limitations of the Sigmoid Function

Mathematically, the sigmoid activation function is given by the following equation, and it squishes all inputs onto the range [0, 1]. 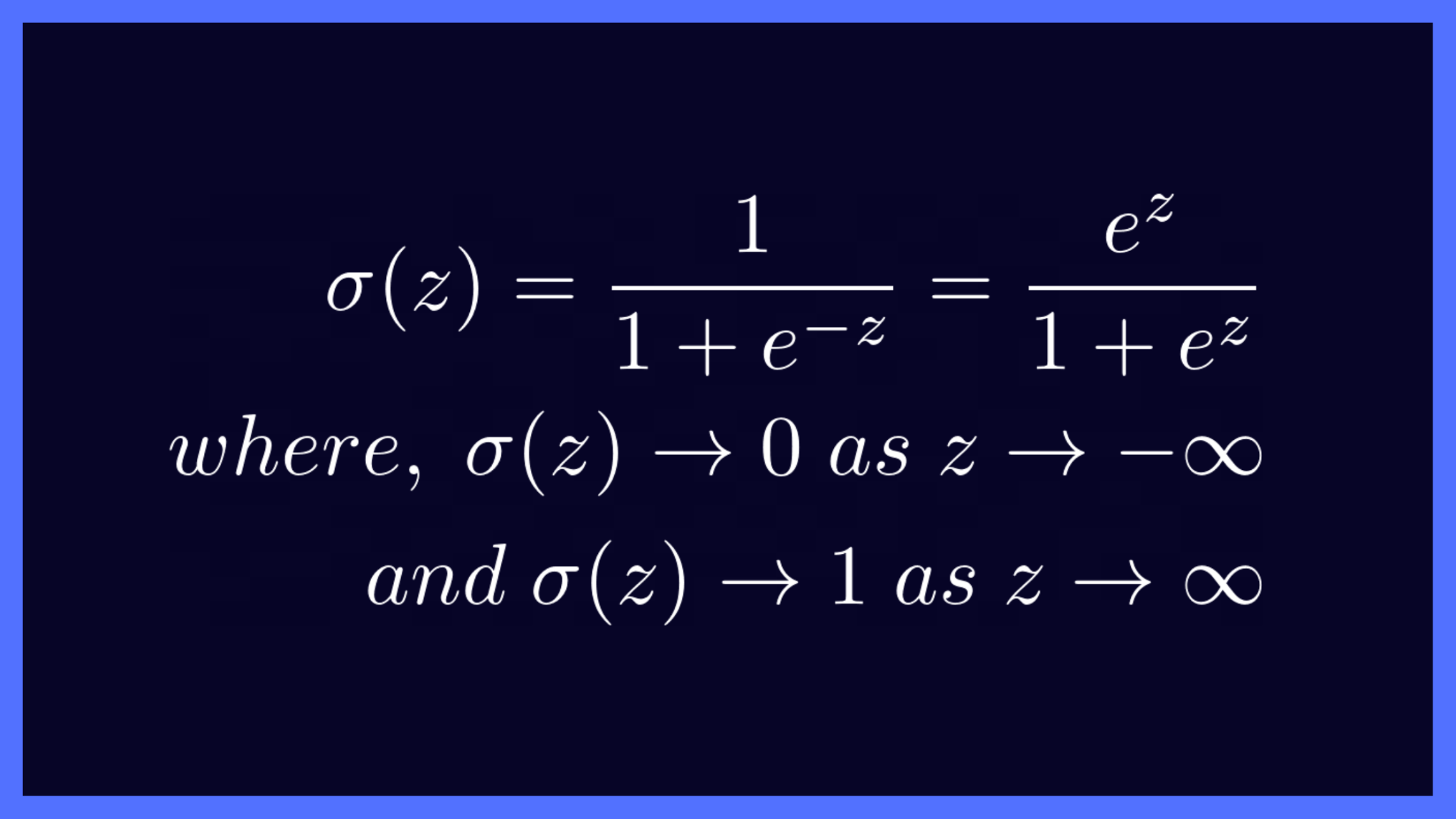 The sigmoid function takes in any real number as the input and maps it to a number between 0 and 1. This is exactly why it’s well-suited for binary classification.

▶️ You may run the following code cell to plot the values of the sigmoid function over a range of numbers. 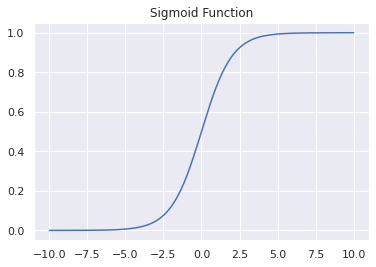 Plot of the Sigmoid Function

You can now fix a threshold, say T, and predict that class whose probability score is greater than the chosen threshold.

However, this won’t quite work when you have more than two classes. Softmax to the rescue!

Limitations of the Argmax Function

The argmax function returns the index of the maximum value in the input array.

Let’s suppose the neural network’s raw output vector is given by z = [0.25, 1.23, -0.8]. In this case, the maximum value is 1.23 and it occurs at index 1. In our image classification example, index 1 corresponds to the second class—and the image is predicted to be that of a panda.

In vector notation, you’ll have 1 at the index where the maximum occurs (at index 1 for the vector z). And you’ll have 0 at all other indices. 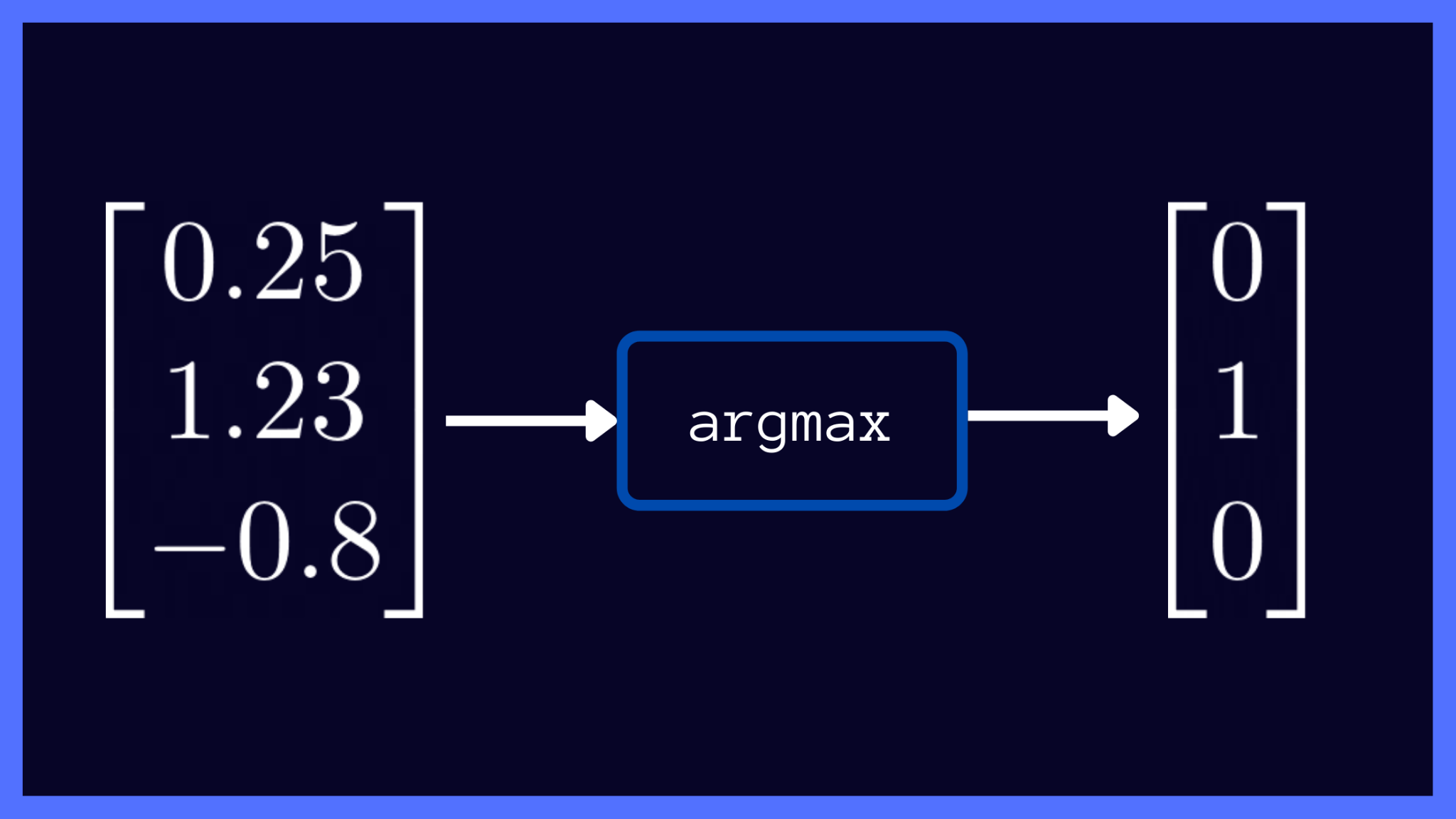 Argmax Output (Image by the author)

One limitation with using the argmax function is that its gradients with respect to the raw outputs of the neural networks are always zero. As you know, it’s the backpropagation of gradients that facilitates the learning process in neural networks.

As you’ll have to plug in the value 0 for all gradients of the argmax output during backpropagation, you cannot use the argmax function in training. Unless there’s backpropagation of gradients, the parameters of the neural network cannot be adjusted, and there’s effectively no learning!

From a probabilistic viewpoint, notice how the argmax function puts all the mass on index 1: the predicted class and 0 elsewhere. So it’s straightforward to infer the predicted class label from the argmax output. However, we would like to know how likely the image is to be that of a panda, a seal, or a duck, and the softmax scores help us with just that!

The equation of the softmax function is given as follows: 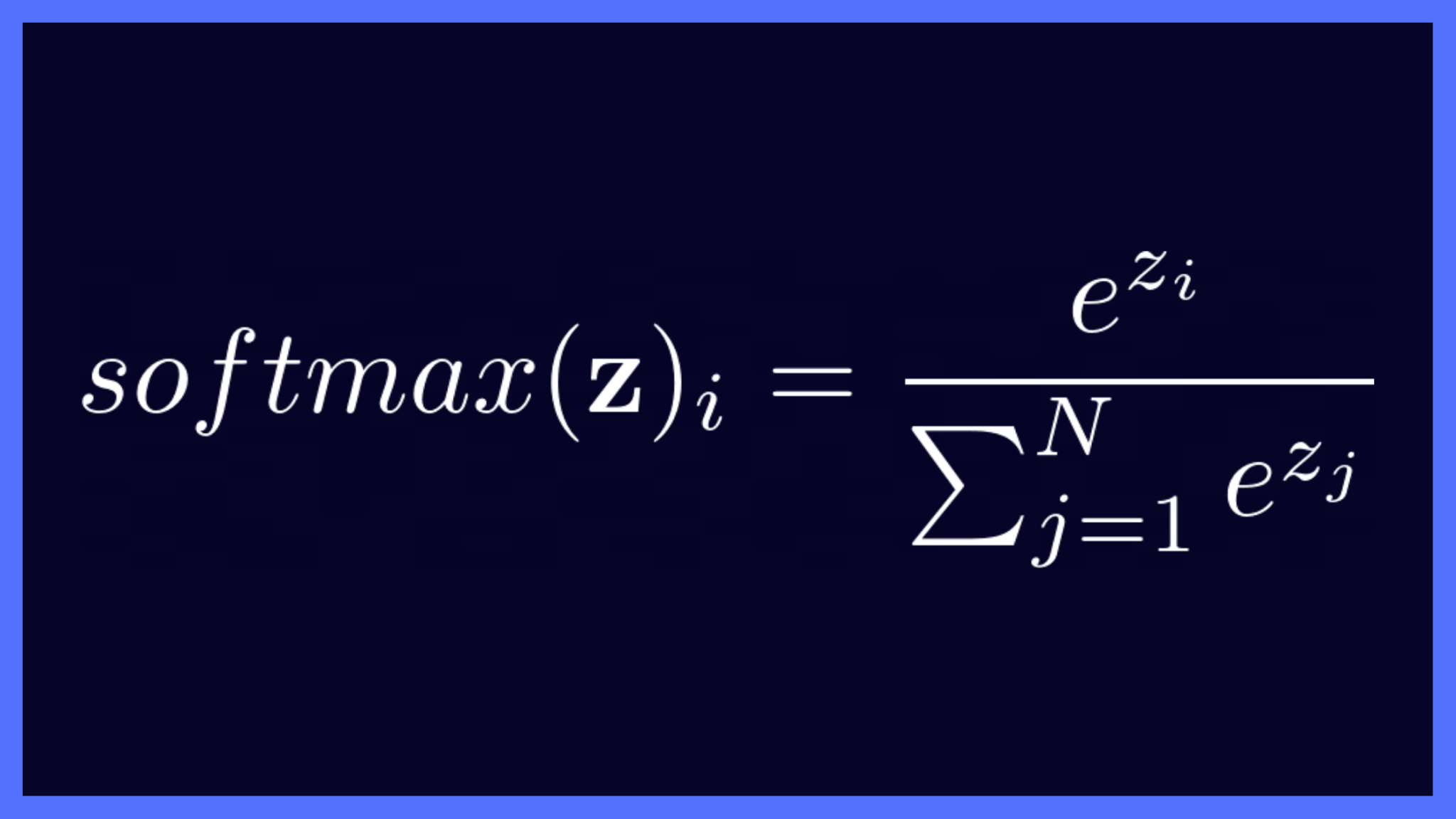 From the plot of e^x, you can see that, regardless of whether the input x is positive, negative, or zero, e^x is always a positive number. 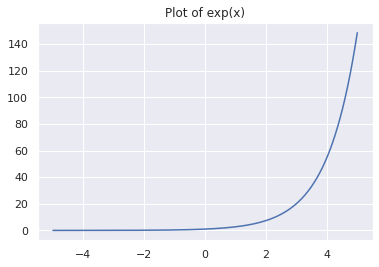 Let’s apply the softmax formula on the vector z, using the steps below: 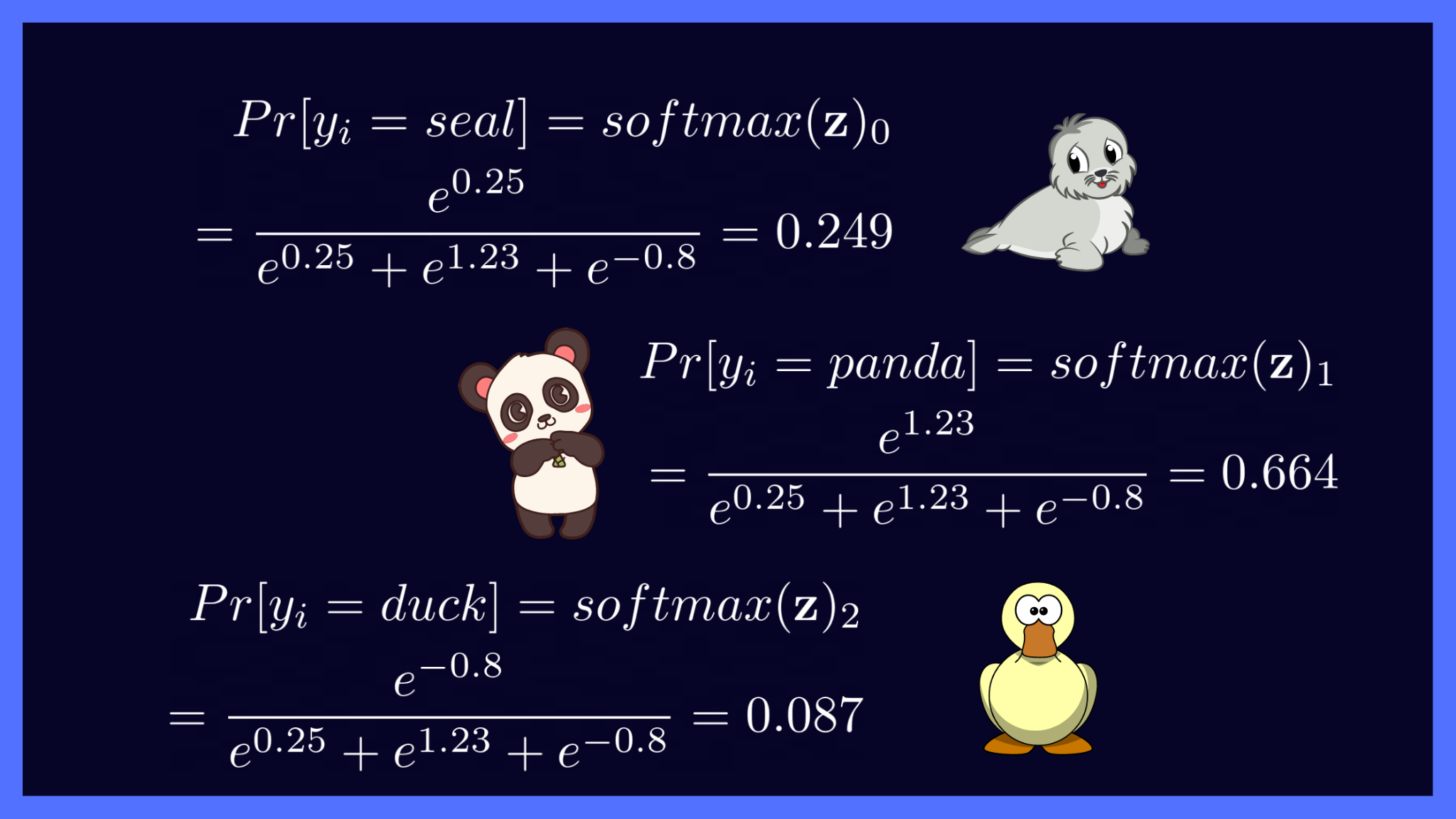 Computing softmax scores for the 3 classes (Image by the author)

▶️ Now that we’ve computed the softmax scores, let’s collect them into a vector for succinct representation, as shown below: 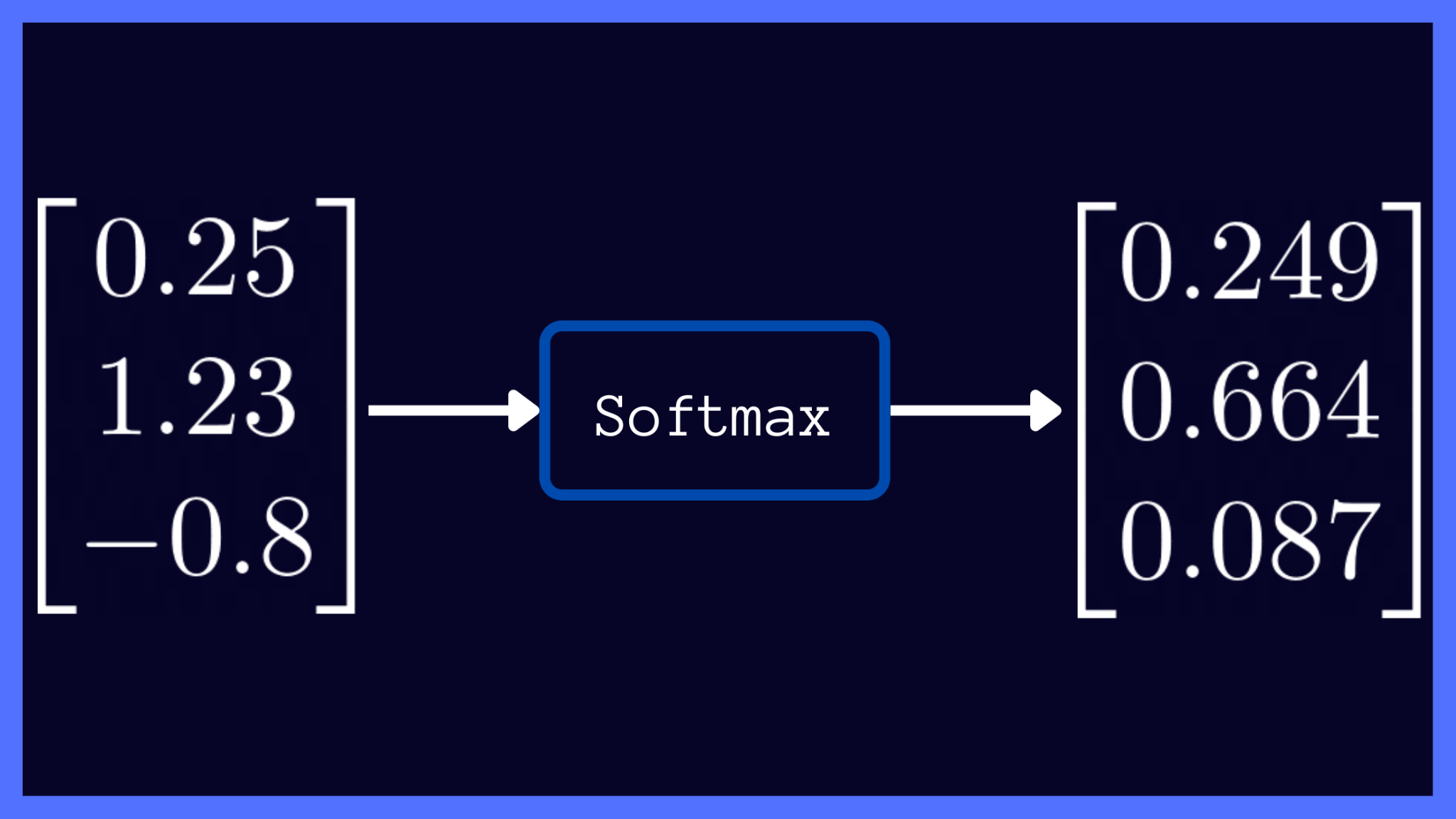 Softmax Output (Image by the author)

From the softmax output above, we can make the following observations:

This is exactly why you can think of softmax output as a probability distribution over the input classes, that makes it readily interpretable.

As a next step, let’s examine the softmax output for our example.

Therefore, applying softmax gives instant interpretability, as you know how likely the test image is to belong to each of the 3 classes. In this particular example, it’s highly likely to be a panda and least likely to be a duck.

How to Implement the Softmax Activation in Python

In the previous section, we did some simple math to compute the softmax scores for the output vector z.

Now let’s translate the math operations into equivalent operations on NumPy arrays. You may use the following code snippet to get the softmax activation for any vector z.

We can parse the definition of the softmax function:

You may now call the function with the output array z as the argument and verify that the scores are identical to what we had computed manually.

Are you wondering if normalizing each value by the sum of entries will suffice, to get relative scores? Let’s see why it’s not an efficient solution.

Why Won’t Normalization by the Sum Suffice

Why use something math-heavy as the softmax activation? Can we not just divide each of the output values by the sum of all outputs?

Well, let’s try to answer this by taking a few examples.

Use the following function to return the array normalized by the sum.

1️⃣ Consider z1 = [0.25, 1.23, -0.8], and call the function div_by_sum. In this case, though the entries in the returned array sum up to 1, it has both positive and negative values. We still aren’t able to interpret the entries as probability scores.

As shown in the code cell above, when all the inputs are positive, you may interpret the normalized scores as probability scores, but the scores are in the same ratio as in the array z3. In this example, the predicted class is still that of a panda.

However, you can’t guarantee that the neural network’s raw output won’t sum up to 0 or have negative entries.

As you can see, when one of the entries is 0, upon calling the div_by_sum function, the entry is still 0 in the normalized array. However, in the softmax output, you can see that 0 has been mapped to a score of 0.219.

In essence, the softmax activation can be perceived as a smooth approximation to the argmax function.

Equivalence of the Sigmoid, Softmax Activations for N = 2

Now let’s revisit our earlier claim that the sigmoid and softmax activations are equivalent for binary classification when N = 2.

Recall that in binary classification, you apply the sigmoid function to the neural network’s output to get a value in the range [0, 1].

When you’re using the softmax function for multiclass classification, the number of nodes in the output layer = the number of classes N.

You can think of binary classification as a special case of multiclass classification. Assume that the output layer has two nodes: one outputting the score z and the other 0.

Effectively, there’s only one node as the other is not given any weight at all. The raw output vector now becomes z = [z, 0]. Next, we may go ahead and apply softmax activation on this vector z and check how it’s equivalent to the sigmoid function we looked at earlier. 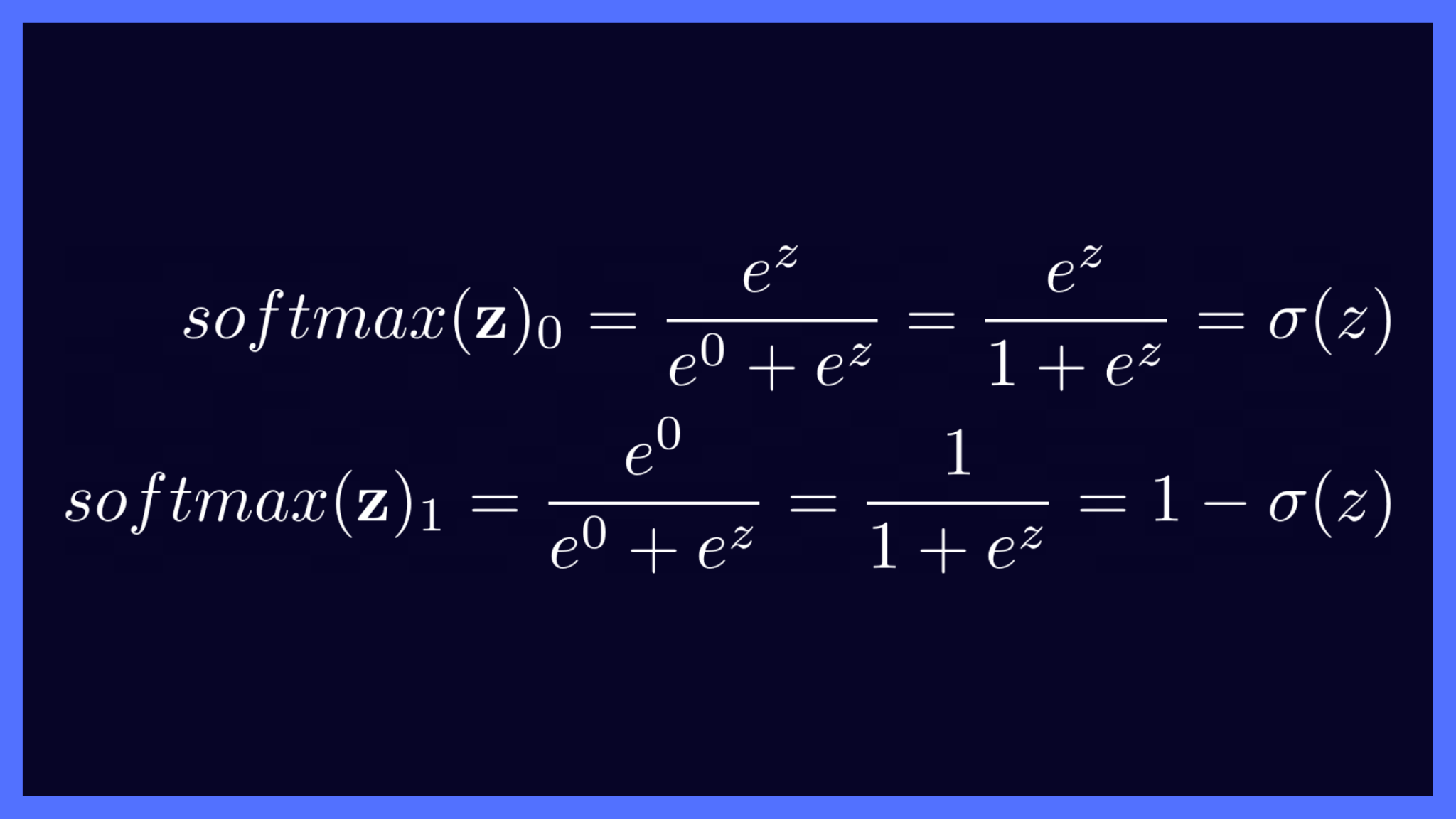 Equivalence of Sigmoid & Softmax Activations (Image by the author)

And with this, we wrap up our discussion on the softmax activation function. Let’s quickly summarize all that we’ve learned.

In this tutorial, you’ve learned the following:

In the next tutorial, we’ll delve deep into cross-entropy loss—a widely-used metric to assess how well your multiclass classification model performs.

Until then, check out other interesting NLP tutorials on vector search, algorithms, and more. Happy learning!

[1] Lesson on Backpropagation, Chain Rule, and Vectorization from CS231n

[3] Implementation of Softmax Regression from Scratch