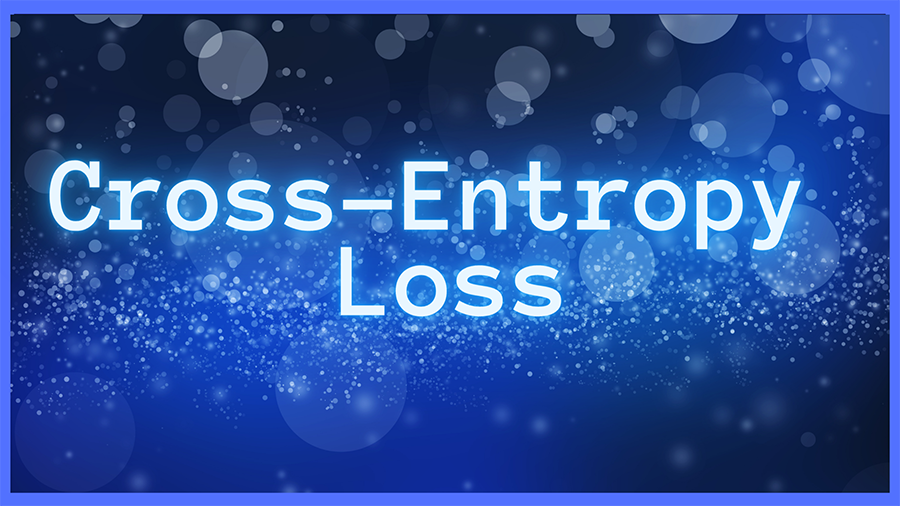 Have you ever wondered what happens under the hood when you train a neural network? You’ll run the gradient descent optimization algorithm to find the optimal parameters (weights and biases) of the network. In this process, there’s a loss function that tells the network how good or bad its current prediction is. The goal of optimization is to find those parameters that minimize the loss function: the lower the loss, the better the model.

In classification problems, the model predicts the class label of an input. In such problems, you need metrics beyond accuracy. While accuracy tells the model whether or not a particular prediction is correct, cross-entropy loss gives information on how correct a particular prediction is. When training a classifier neural network, minimizing the cross-entropy loss during training is equivalent to helping the model learn to predict the correct labels with higher confidence.

What is Cross Entropy?

Before we proceed to learn about cross-entropy loss, it’d be helpful to review the definition of cross entropy. In the context of information theory, the cross entropy between two discrete probability distributions is related to KL divergence, a metric that captures how close the two distributions are.

Given a true distribution t and a predicted distribution p, the cross entropy between them is given by the following equation.

Note: log(x) refers to log to the base e (or natural logarithm), also written as ln(x).

So how is cross entropy relevant in neural networks?

Recall that in binary classification, the sigmoid activation is used in the output layer, and the neural network outputs a probability score (p) between 0 and 1; the true label (t) being one of {0, 1}.

In case of multiclass classification, we use the softmax activation at the output layer to get a vector of predicted probabilities p. The true distribution t contains all of the probability mass (1) at the index of the correct class, and 0 everywhere else. For example, in a classification problem with N classes, the true distribution corresponding to class i is a vector that’s N classes long, with 1 at the index of the class label i and 0 at all other indices.

We’ll discuss this in greater detail in the coming sections.

Let’s start this section by reviewing the log function in the interval (0,1]. 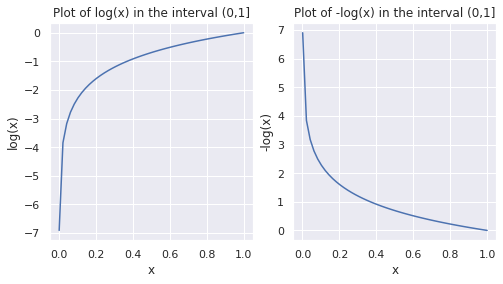 As seen in the plots above, in the interval (0,1], log(x) and -log(x) are negative and positive, respectively. Observe how -log(x) approaches 0 as x approaches 1. This observation will be helpful when we parse the expression for cross-entropy loss.

In binary classification, the raw output of the neural network is passed through the sigmoid function, which outputs a probability score p = σ(z), as shown below. 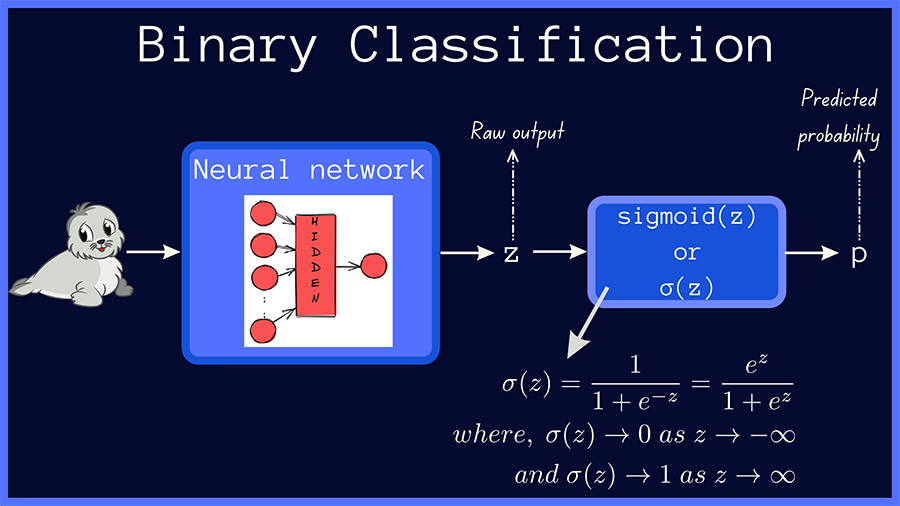 A Simple Binary Classification Model (Image by the author)

The true value, or the true label, is one of {0, 1} and we’ll call it t. The binary cross-entropy loss, also called the log loss, is given by:

As the true label is either 0 or 1, we can rewrite the above equation as two separate equations.

When t = 1, the second term in the above equation goes to zero, and the equation reduces to the following:

Therefore, when t =1, the binary cross-entropy loss is equal to the negative logarithm of the predicted probability p.

Similarly, when the true label t=0, the term t.log(p) vanishes, and the expression for binary cross-entropy loss reduces to: 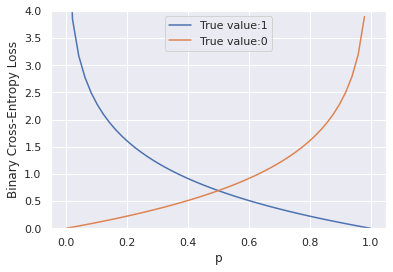 From the plots above, we can make the following observations:

But which predictions does cross-entropy loss penalize the most?

Putting it all together, cross-entropy loss increases drastically when the network makes incorrect predictions with high confidence.

Next, let’s call the function binary_cross_entropywith arrays of true and predicted values as the arguments.

To get a better idea of how the loss varies with p, let’s modify the function definition to print out the values of the loss for each of the samples, as shown below.

Now that we’ve modified the function, let’s call the function yet again to check the outputs.

The highest value of the loss, 1.897, occurs when the network predicts a probability score of 0.85 corresponding to a true value of 0. Suppose the problem is to classify whether the given image is that of a seal or not. The model, in this case, is 85% confident that the image is a seal when it actually isn’t.

Similarly, the second highest value of the binary cross-entropy loss, 1.771 occurs when the network predicts a score of 0.17, significantly lower than the true value of 1. In the image classification example, this means that the model is only about 17% confident of the input image being a seal, when it actually is a seal.

This validates our earlier observation that the loss is higher when the predictions are away from the true values.

In the next section, let’s explore an extension of cross-entropy loss to the multiclass classification case.

Let’s formalize the setting we’ll consider. In a multiclass classification problem over N classes, the class labels are 0, 1, 2 through N - 1. The labels are one-hot encoded with 1 at the index of the correct label, and 0 everywhere else.

For example, in an image classification problem where the input image is one of {panda, seal, duck}, the class labels and the corresponding one-hot vectors are shown below. 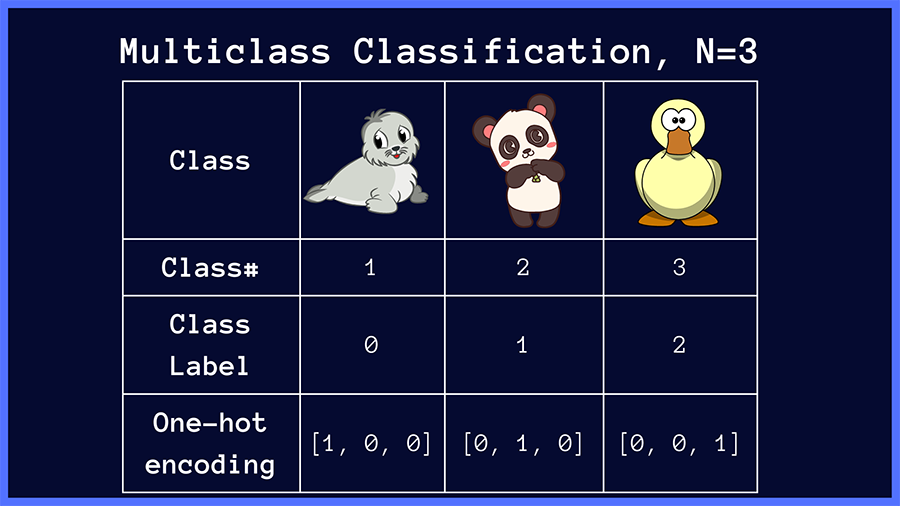 In multiclass classification, the raw outputs of the neural network are passed through the softmax activation, which then outputs a vector of predicted probabilities over the input classes. 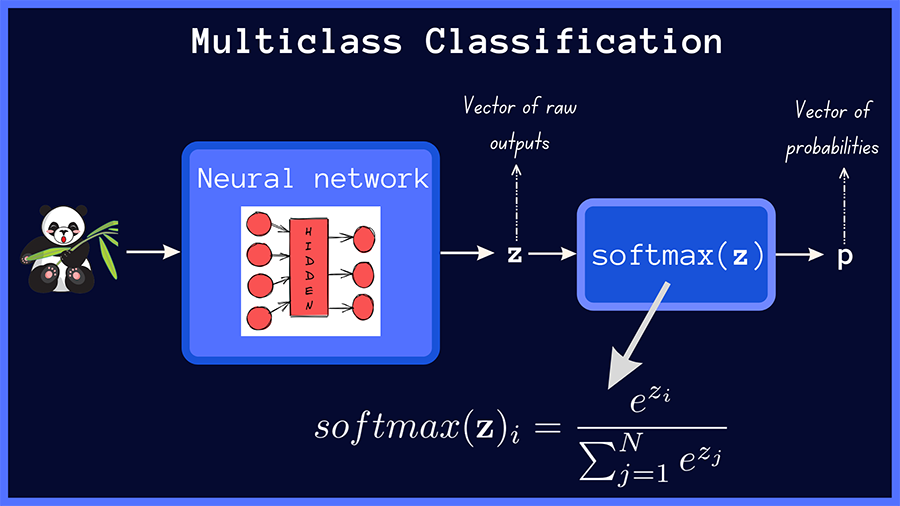 A Simple Multiclass Classification Model (Image by the author)

The categorical cross-entropy loss between the true distribution t and the predicted distribution p in a multiclass classification problem with N classes is given by:

This expression may seem daunting, but we’ll parse this and arrive at a much simpler expression.

The loss, therefore, reduces to the negative logarithm of the predicted probability for the correct class. The loss approaches zero, as p_k → 1.

In the figure below, we present some examples of true and predicted distributions. In our image classification example, if the target class is seal, the categorical cross-entropy loss is minimized when the network predicts a probability score close to 1 for the correct class (seal). This works similarly for the other target classes, panda and duck. 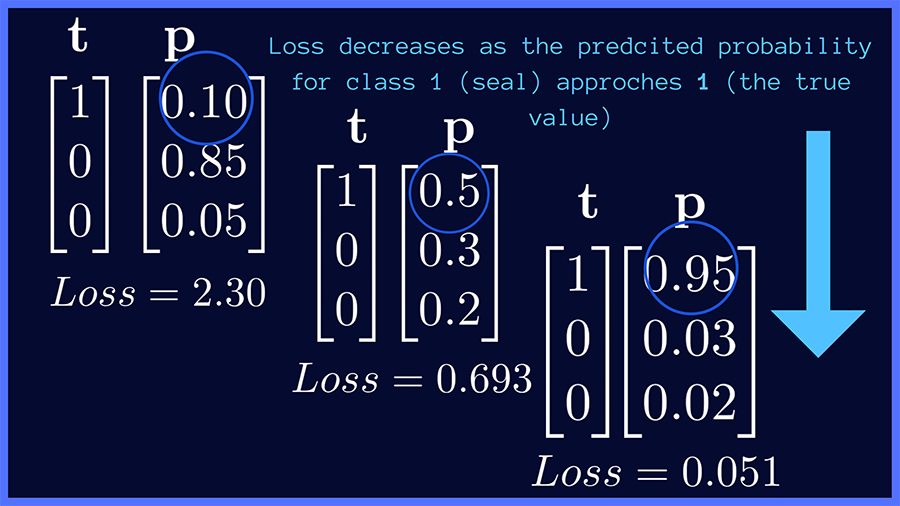 For a dataset with S samples in all, the categorical cross-entropy loss is given by:

The code snippet below contains the definition of the function categorical_cross_entropy.The function accepts two lists as arguments: t_list and p_list containing lists of true and predicted distributions, respectively. It then computes the cross-entropy loss over each set of predicted and true values.

Now, let’s make a call to the function with the lists of true and predicted distribution vectors as the arguments and check the outputs.

From the output above, we see that the loss is lower when the model predicts a higher probability corresponding to the correct class label.

One of the limitations of the argmax function as the output layer activation is that it doesn’t support the backpropagation of gradients through the layers of the neural network. However, when using the softmax function as the output layer activation, along with cross-entropy loss, you can compute gradients that facilitate backpropagation. The gradient evaluates to a simple expression, easy to interpret and intuitive.

If you’d like to know how softmax activation and cross-entropy loss yield a gradient that can be used in backpropagation, please read ahead. The preceding sections do not necessitate the use of the following section but this will provide interesting and potentially helpful insight.

The following subsections assume you have some familiarity with differential calculus. To follow along, you should be able to apply the chain rule for differentiation and compute partial derivatives.

Derivative of the Softmax Function

Recall that if z is the output of the neural network, then softmax(z) outputs a vector p of probabilities. Let’s start with the expression for softmax activation.

Now, let’s compute the derivative of the softmax output p_i with respect to the raw output z_i of the neural network.

Here, the computation of derivatives can be handled under two different cases, as shown below.

Derivative of the Cross-Entropy Loss Function

Next, let’s compute the derivative of the cross-entropy loss function with respect to the output of the neural network. We’ll apply the chain rule and substitute the derivatives of the softmax activation function.

As seen above, the gradient works out to the difference between the predicted and true probability values.

As a next step, you may try spinning up a simple image classification model using softmax activation and cross-entropy loss function. Until the next tutorial!

[2] Essence of Calculus, YouTube playlist by Grant Sanderson of 3Blue1Brown