Pinecone lets you implement semantic, audio, or visual search into your applications using vector search. But first you need to convert your data into vector embeddings, and vision transformers do that for images. This article introduces vision transformers, how they work, and how to use them.

Vision and language are the two big domains in machine learning. Two distinct disciplines with their own problems, best practices, and model architectures. At least, that was the case.

The Vision Transformer (ViT)[1] marks the first step towards the merger of these two fields into a single unified discipline. For the first time in the history of ML, a single model architecture has come to dominate both language and vision.

Before ViT, transformers were “those language models” and nothing more. Since then, ViT and further work has solidified them as a likely contender for the architecture that merges the two disciplines.

This article will dive into ViT, explaining and visualizing the intuition behind how and why it works. Later, we’ll look at how to implement it ourselves.

Transformers were introduced in 2017 by Vaswani et al. in the now-famous paper “Attention is All You Need” [2]. The primary function powering these models is the attention mechanism.

In NLP, attention allows us to consider the context of words and focus attention on the key relationships between different tokens (represented as word or sub-word tokens).

It works by comparing “token embeddings” and calculating an “alignment” score that describes how similar two tokens are based on their semantic and contextual meaning.

In the layers preceding the attention layer, each word embedding is encoded into a “vector space”. 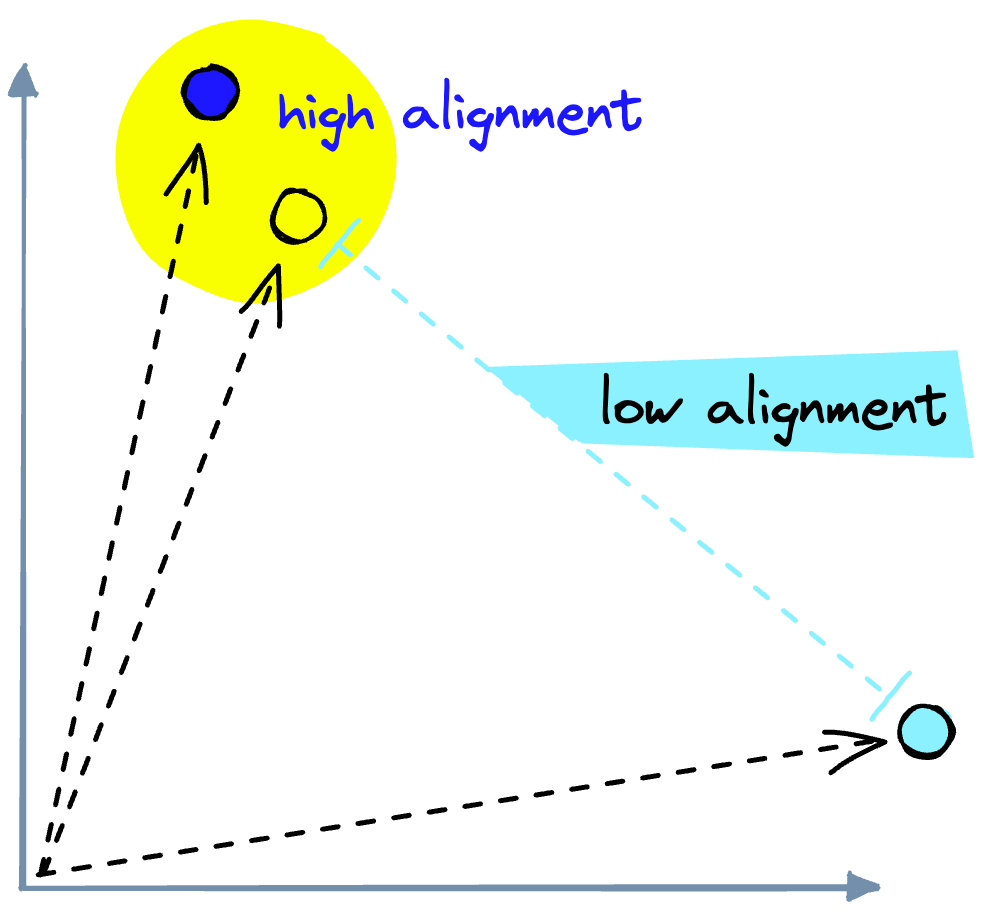 Alignment between vectors is higher where vectors share similar direction and magnitude.

Before applying attention, our tokens' initial positions are based purely on a “general meaning” of a particular word or sub-word token.

As we go through several encoder blocks (these include the attention mechanism), the position of these embeddings is updated to better reflect the meaning of a token with respect to its context. The context being all of the other words within that specific sentence.

So, given three phrases:

The initial embedding for the token bank is equal. Yet, the token is pushed towards its context-based meaning through many attention encoder blocks. These blocks might push bank towards tokens like [plane, airport, flight], [nature, fields, outdoors], or [finance, England, money].

An encoder with attention layers can add contextual meaning to embeddings.

Attention has been used in Convolutional Neural Networks (CNNs) over the years. Generally speaking, this has been shown to produce some benefit but is often computationally limited.

Attention is a heavy operation and does not scale to large sequences. Therefore, attention can only be used in later CNN layers — where the number of pixels has been reduced. This limits the potential benefit of attention as it cannot be applied across the complete set of network layers [1] [3].

Transformer models do not have this limitation and instead apply attention over many layers.

Each of these encoder “blocks” encodes more information into the token (or patch) embeddings using their context. This operation produces a deeper semantic representation of each token.

At the end of this process, we get super information-rich embeddings. These embeddings are the ultimate output of the core of a transformer, including ViT.

Another set of layers is used to transform these rich embeddings into useful predictions. These final few layers are called the “head” and a different head is used for each task, such as for classification, Named Entity Recognition (NER), question-answering, etc.

Example of a transformer encoder building information-rich final embeddings before passing these on to a task-specific “head”.

ViT works similarly, but rather than consuming word tokens, ViT consumes image patches. The remainder of the transformer functions in the same way.

The new procedure introduced by ViT is limited to the first few processing steps. These first steps take us from images to a set of patch embeddings.

If we didn’t split the images into patches, we could alternatively feed in pixel values of the image directly. However, this causes problems with the attention mechanism.

Attention requires the comparison of every input to all other inputs. If we perform that on a 224x224 pixel image, we must perform $224^4$ ($2.5E^9$) comparisons. That’s for a single attention layer, of which transformers contain several.

Doing this would be a computational nightmare far beyond the capabilities of even the latest GPUs and TPUs within a reasonable timeframe.

Therefore, we create image patches and embed those as patch embeddings. Our high-level process for doing this is as follows:

After these steps, we process the patch embeddings like token embeddings in a typical transformer. Let’s dive into each of these components in more detail.

Our first step is the transformation of images into image patches. In NLP, we do the same thing. Images are sentences and patches are word or sub-word tokens. 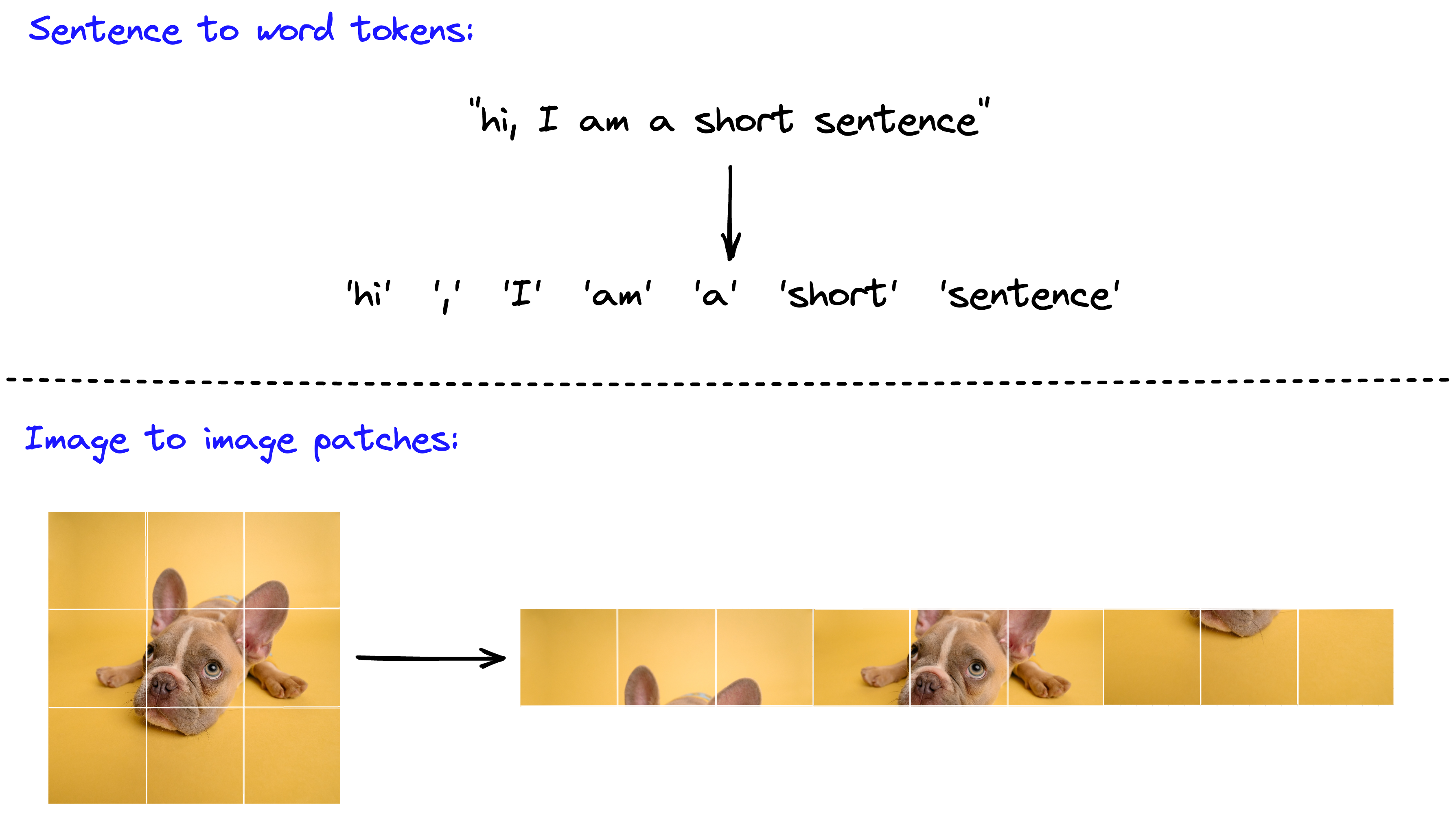 NLP transformers and ViT both split larger sequences (sentences or images) into tokens or patches.

Through this, these image patches act as a form of much needed quantization required for effective use of attention. 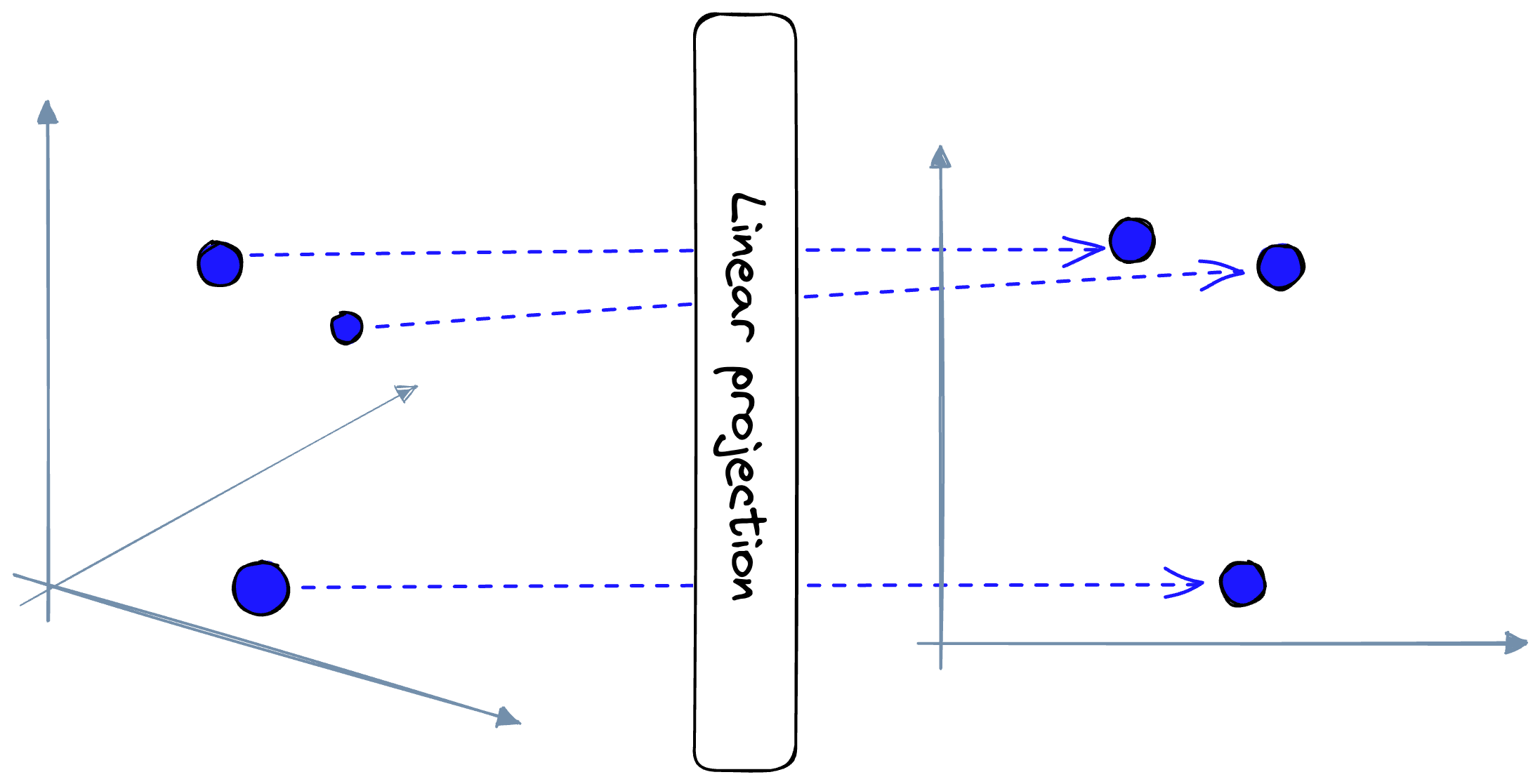 The linear projection layer attempts to transform arrays into vectors while maintaining their “physical dimensions”. Meaning similar image patches should be mapped to similar patch embeddings.

By mapping the patches to embeddings, we now have the correct dimensionality for input into the transformer. However, two more steps remain before the embeddings are fully prepared.

One feature introduced to transformers with the popular BERT models was the use of a [CLS] (or “classification”) token. The [CLS] token was a “special token” prepended to every sentence fed into BERT[4]. 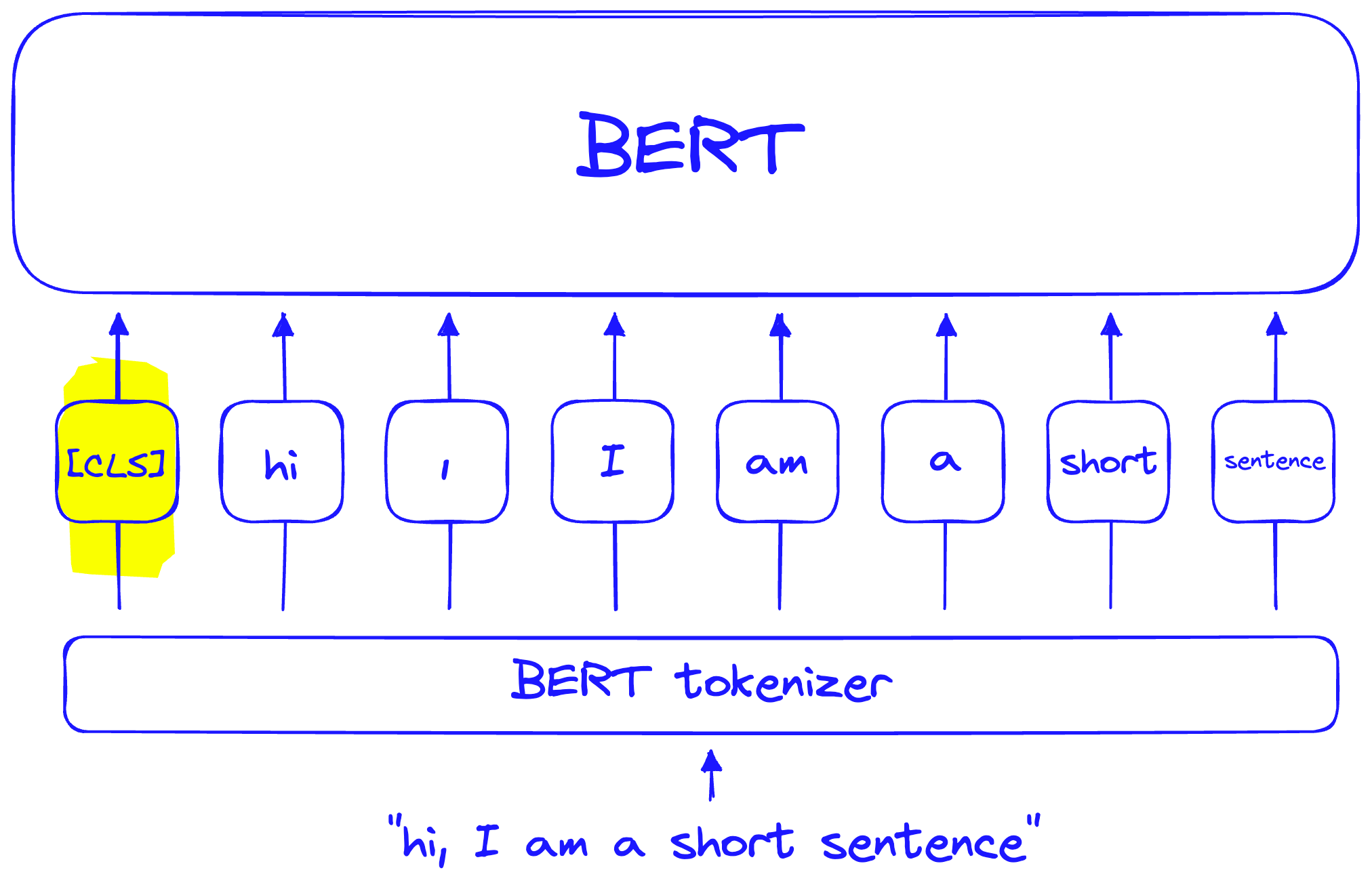 The BERT [CLS] token is preappended to every sequence.

This [CLS] token is converted into a token embedding and passed through several encoding layers.

Two things make [CLS] embeddings special. First, it does not represent an actual token, meaning it begins as a “blank slate” for each sentence. Second, the final output from the [CLS] embedding is used as the input into a classification head during pretraining.

Using a “blank slate” token as the sole input to a classification head pushes the transformer to learn to encode a “general representation” of the entire sentence into that embedding. The model must do this to enable accurate classifier predictions.

The preferred pretraining function of ViT is based solely on classification, unlike BERT, which uses masked language modeling. Based on that, this learning embedding is even more important to the successful pretraining of ViT.

Transformers do not have any default mechanism that considers the “order” of token or patch embeddings. Yet, order is essential. In language, the order of words can completely change their meaning.

The same is true for images. If given a jumbled jigsaw set, it’s hard-to-impossible for a person to accurately predict what the complete puzzle represents. This applies to transformers too. We need a way of enabling the model to infer the order or position of the puzzle pieces.

After creating the patch embeddings and prepending the “class” embedding, we sum them all with positional embeddings.

These positional embeddings are learned during pretraining and (sometimes) during fine-tuning. During training, these embeddings converge into vector spaces where they show high similarity to their neighboring position embeddings — particularly those sharing the same column and row: 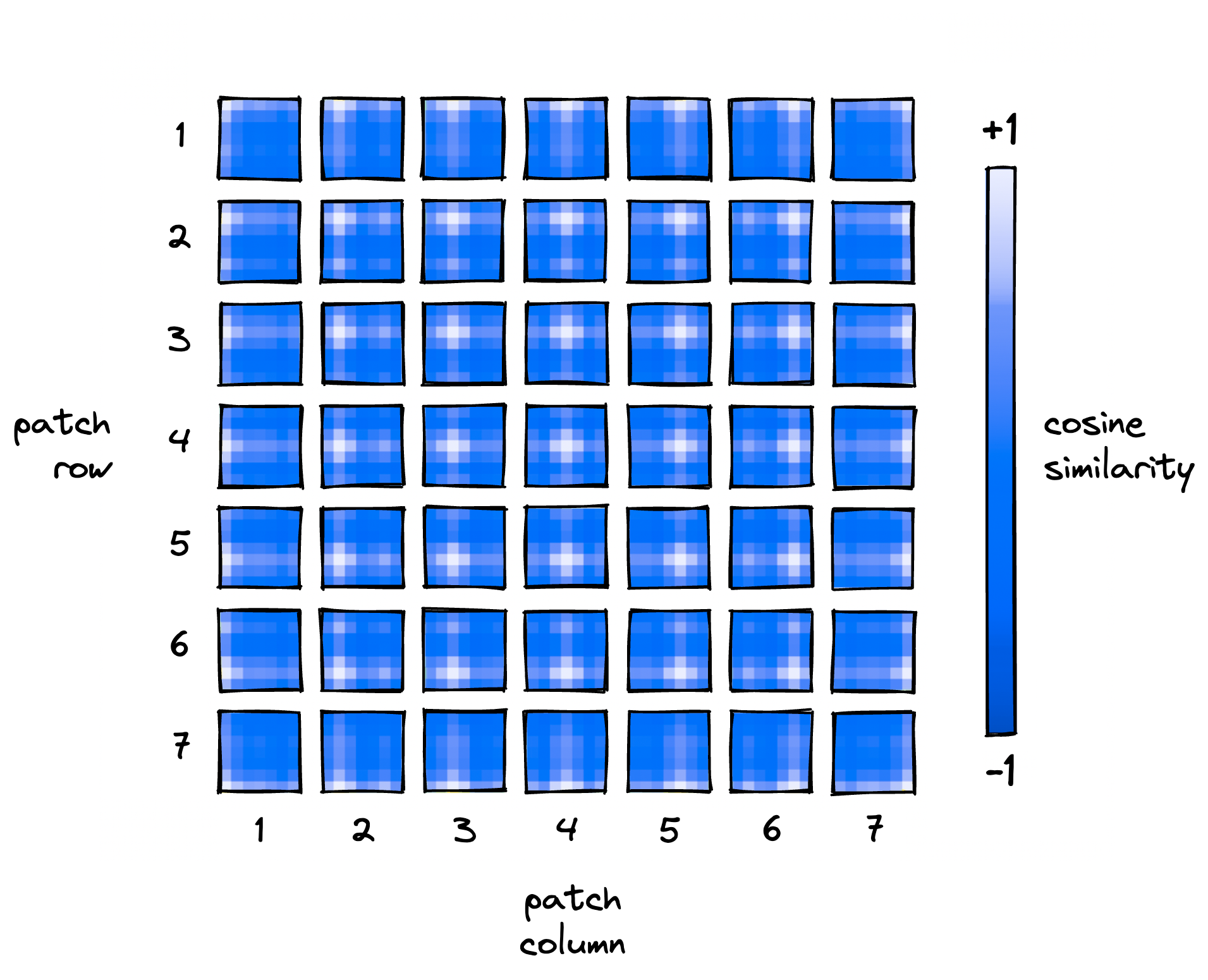 After adding the positional embeddings, our patch embeddings are complete. From here, we pass the embeddings to the ViT model, which processes them as a typical transformer model.

We’ve worked through the logic and innovations introduced by ViT. Let’s now work through an example of implementing the model. We start by installing all of the libraries that we’ll be using:

We will fine-tune with a well-known image classification dataset called CIFAR-10. It can be downloaded via Hugging Face’s Datasets library, and we’ll download both the training and validation/test datasets.

The training dataset contains 50K images across 10 classes. To find the human-readable class labels, we can do the following:

Every record in the dataset contains an img and label feature. The img values are all Python PIL objects with 32x32 pixel resolution and three color channels, red, green, and blue (RGB).

Preceding the ViT model, we use something called a feature extractor. The feature extractor is used to preprocess images into normalized and resized image “pixel_values” tensors. We initialize it from the Hugging Face Transformers library like so:

The feature extractor configuration shows that normalization and resizing are set to true. Normalization is performed across the three color channels using the mean and standard deviation values stored in "image_mean" and "image_std" respectively. The output size is set by "size" at 224x224 pixels.

To process an image with the feature extractor, we do the following:

Later we’ll be fine-tuning our ViT model with these tensors. Although fine-tuning is not as computationally heavy as pretraining, it still takes time. Therefore we ideally should be running everything on GPU rather than CPU. So, we move these tensors to a CUDA-enabled GPU if it is available.

Fortunately, the Trainer utility we will use for fine-tuning later does handle this move for our data by default. Still, we will need to later repeat this step for the model.

To apply this preprocessing step across the entire dataset more efficiently, we will package into a function called preprocess and apply the transformations using the with_transform method, like so:

The next step is downloading and initializing ViT. Again, we’re using Hugging Face Transformers with the same from_pretrained method used to load the feature extractor.

We have 10 classes in CIFAR-10, so we must specify that we’d like to initialize the head with 10 outputs. We do this via the num_labels parameter.

Now we’re ready to move on to fine-tuning.

We will implement fine-tuning using Hugging Face’s Trainer function. Trainer is an abstracted training and evaluation loop implemented in PyTorch for transformer models.

There are several variables that we must define beforehand. First, we start with the collate function. Collate helps us handle the collation of our dataset into batches of tensors that we will be fed into the model during training.

Another important variable is the evaluation metric to measure our model performance over time. We will use a simple accuracy metric calculated as: $$ Accuracy = \frac{TP+TN}{TP+TN+FP+FN} $$ Where:

We implement this using Datasets metrics, defined in the compute_metrics function:

The final variable required by Trainer is the TrainingArguments configuration. These are simply the training parameters, save settings, and logging settings.

With all this, we’re ready to initialize Trainer and begin the training loop.

Training will take some time, even on GPU. Once complete, the best version of the model will be saved in the output_dir we set in the TrainingArguments config object.

The Trainer performs evaluation during training but we can also perform a more qualitative check (or make a prediction) by passing a single image through the feature_extractor and model. We will use this image:

The image isn’t very clear, and most people would struggle to correctly classify the image. However, we can see from the label that this is a cat. Let’s see what the model predicts.

That concludes our introduction to the Vision Transformer and how to use it via Hugging Face Transformers. It’s worth noting how quickly transformers have come to dominate NLP and, increasingly likely, computer vision in the near future.

Before 2021, transformers being used in anything but NLP was unheard of. Yet, despite being known as “those language models”, they have already found use in some of the most advanced computer vision applications. Transformers are a crucial component of diffusion models[5] and even Tesla’s Full Self Driving[6].

As time progresses, we will undoubtedly see both fields continue to merge and more real-world applications of transformers in both domains. 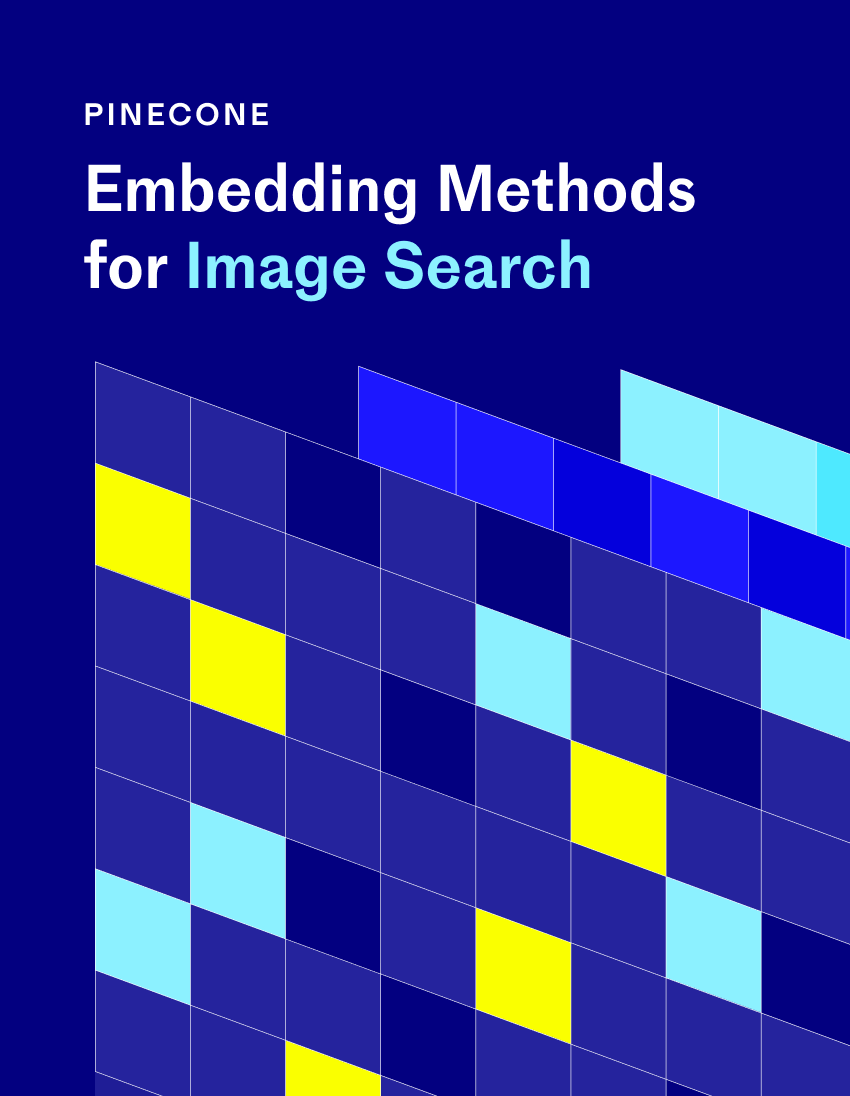