Industries today deal with ever increasing amounts of data. Especially in retail, fashion, and other industries where the image representation of products plays an important role.

In such a situation, we can often describe one product in many ways, making it challenging to perform accurate and least time-consuming searches.

Could I take advantage of state-of-the-art artificial intelligence solutions to tackle such a challenge?

This is where OpenAI’s CLIP comes in handy. A deep learning algorithm that makes it easy to connect text and images.

After completing this conceptual blog, you will understand: (1) what CLIP is, (2) how it works and why you should adopt it, and finally, (3) how to implement it for your own use case using both local and cloud-based vector indexes.

Contrastive Language-Image Pre-training (CLIP for short) is a state-of-the-art model introduced by OpenAI in February 2021 [1].

CLIP is a neural network trained on about 400 million (text and image) pairs. Training uses a contrastive learning approach that aims to unify text and images, allowing tasks like image classification to be done with text-image similarity.

This means that CLIP can find whether a given image and textual description match without being trained for a specific domain. Making CLIP powerful for out-of-the-box text and image search, which is the main focus of this article.

Why should you adopt the CLIP models?

The use of the contrastive objective increased the efficiency of the CLIP model by 4-to-10x more at zero-shot ImageNet classification.

Also, the adoption of the Vision Transformer created an additional 3x gain in compute efficiency compared to the standard ResNet. 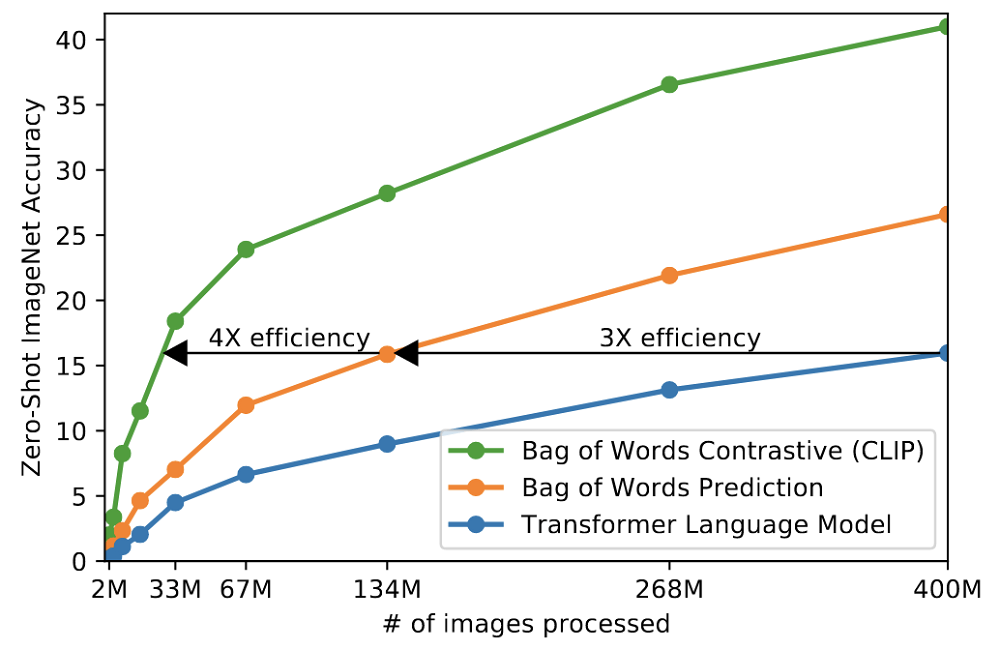 The efficiency of CLIP at zero-shot transfer (source)

CLIP outperforms existing ImageNet models in new domains because of its ability to learn a wide range of visual representations directly from natural language. 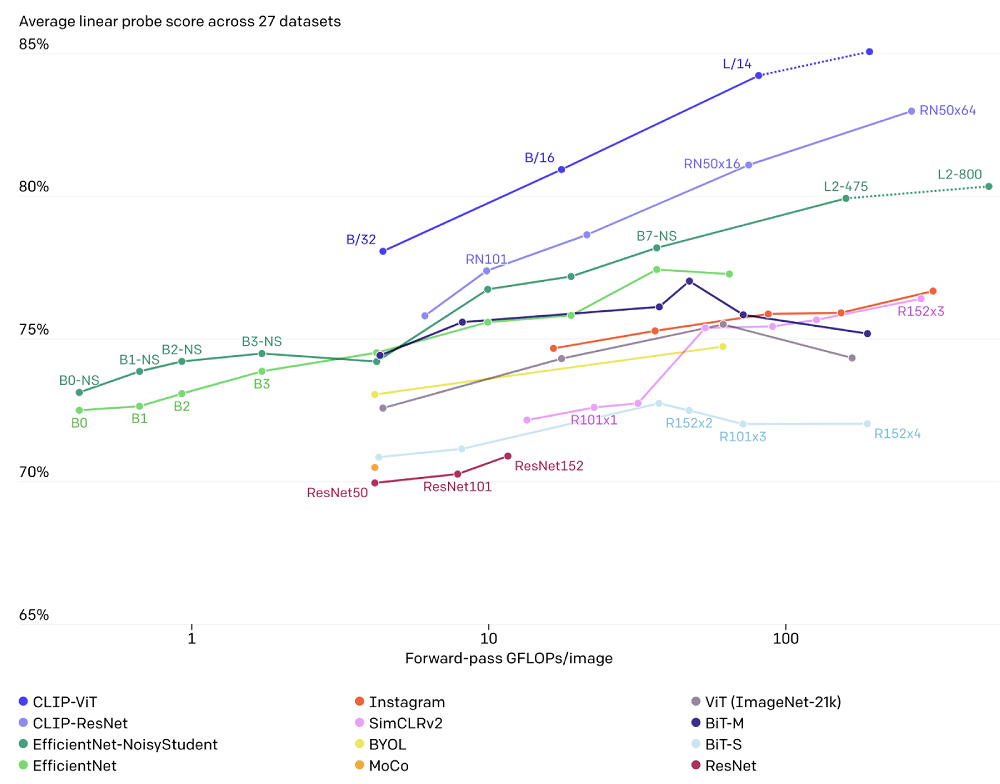 CLIP architecture consists of two main components: (1) a text encoder, and (2) an Image encoder. These two encoders are jointly trained to predict the correct pairings of a batch of training (image, text) examples.

How does the CLIP algorithm work?

We can answer this question by understanding these three approaches: (1) contrastive pre-training, (2) dataset classifier creation from labeled text, and finally, (3) application of the zero-shot technique for classification.

Let’s explain each of these three concepts. 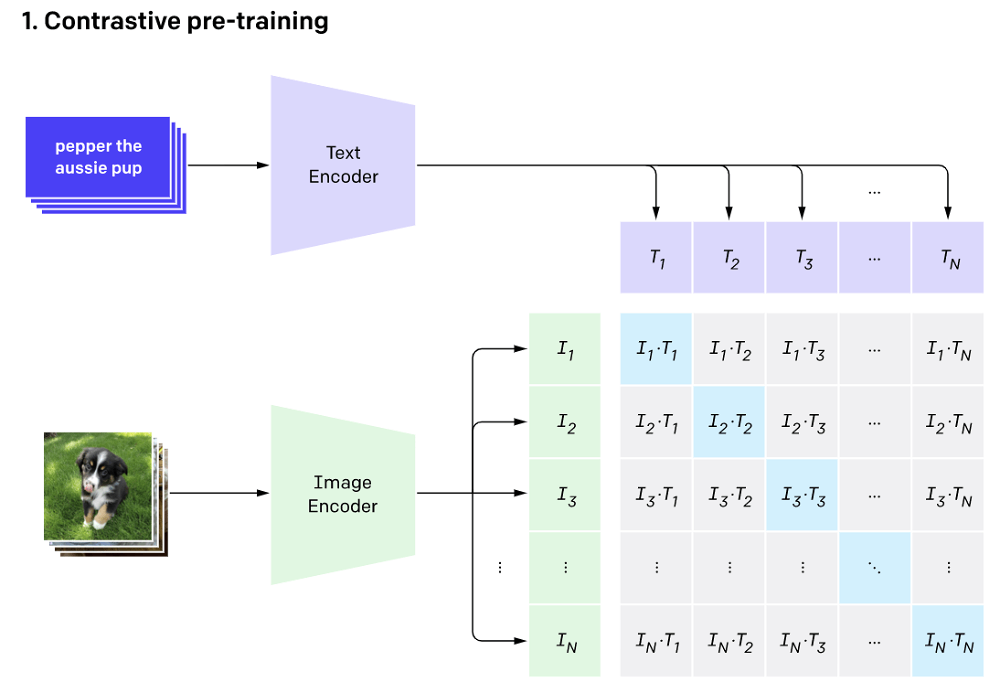 During this phase, a batch of 32,768 pairs of image and text is passed through the text and image encoders simultaneously to generate the vector representations of the text and the associated image, respectively.

The training is done by searching for each image, the closest text representation across the entire batch, which corresponds to maximizing cosine similarity between the actual N pairs that are maximally close.

Also, it makes the actual images far away from all the other texts by minimizing their cosine similarity.

Finally, a symmetric cross-entropy loss is optimized over the previously computed similarity scores. 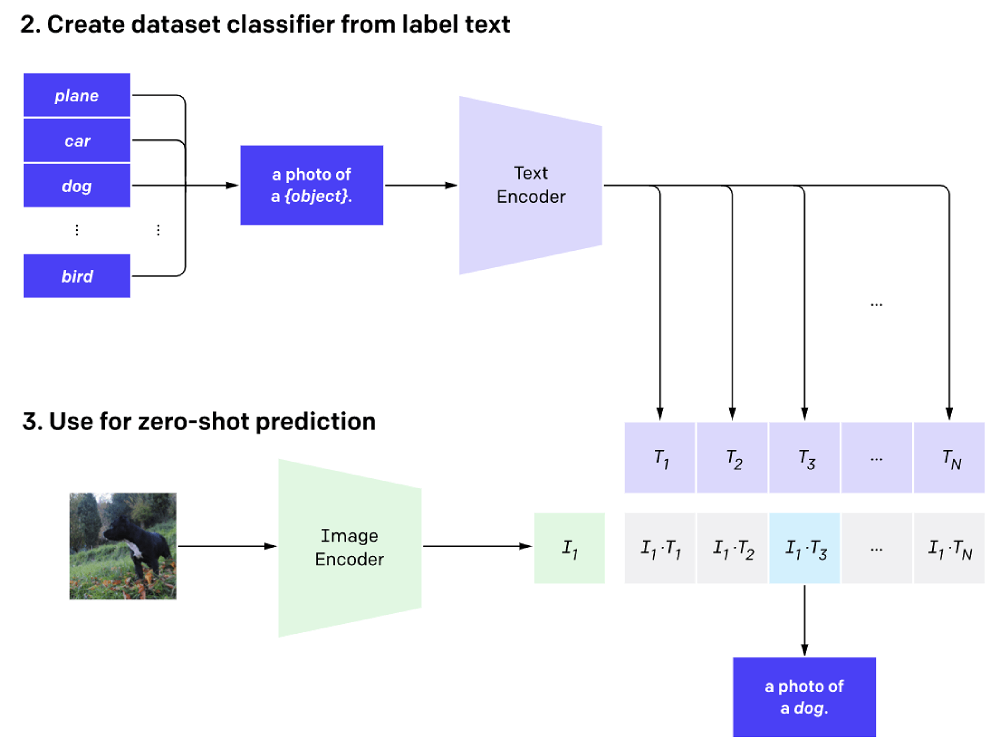 This second step section encodes all the labels/objects in the following context format: “a photo of a {object}. The vector representation of each context is generated from the text encoder.

If we have dog, car, and plane as the classes of the dataset, we will output the following context representations: 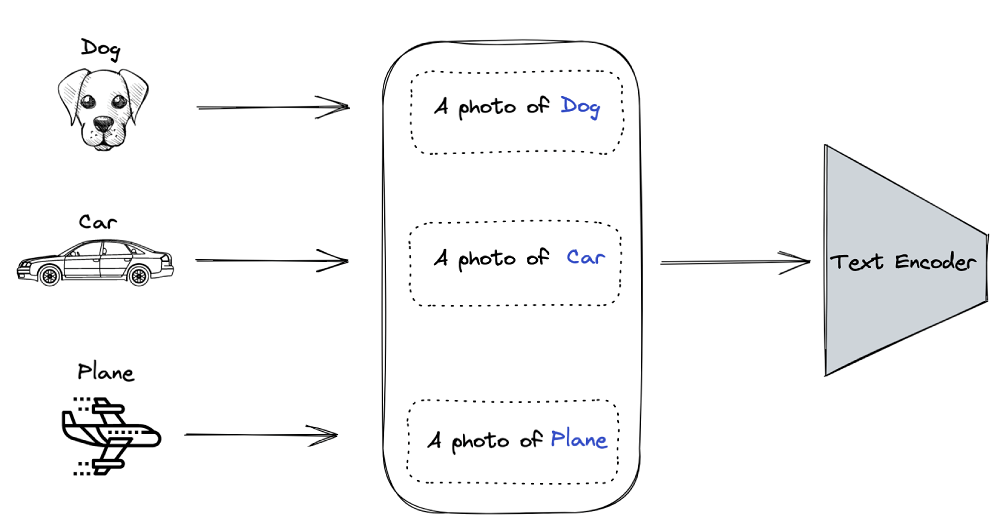 Image illustration of the context representations

3. Use of zero-shot prediction

We use the output of section 2 to predict which image vector corresponds to which context vector. The benefit of applying the zero-shot prediction approach is to make CLIP models generalize better on unseen data.

Implementation of CLIP With Python

At the end of the process, you will understand the benefits of using a vector database for such a use case.

General workflow of the use case

The end-to-end process is explained through the workflow below. We start by collecting data from the Hugging Face dataset, which is then processed to further generate vector index vectors through the Image and Text Encoders. Finally, the Pinecone client is used to insert them to a vector index.

The user will then be able to search images based on either text or another image.

The following libraries are required to create the implementation.

The conceptual captions dataset consists of around 3.3M images with two main columns: the image URL and its caption. You can find more details from the corresponding huggingface link.

Not all URLs in the dataset are valid. We fix that by testing and removing all erroneous URL entries.

The following expression creates a new dataframe with a new column “is_valid” which is True when the URL is valid or False otherwise.

The second step is to download the images from the URLs. This helps us avoid constant web requests.

The prerequisites to successfully implement the encoders are the model, the processor, and the tokenizer.

The following function fulfills those requirements from the model ID and the device used for the computation, either CPU or GPU.

We start by generating the embedding of a single text before applying the same function across the entire dataset.

Format of the vector index containing the captions/text embeddings

The same process is used for image embeddings but with different functions.

The final format of the text and image vector index looks like this:

Vector index with image and captions embeddings (Image by Author)

In this section, we will explore two different approaches to storing the embeddings and metadata for performing the searches: The first is using the previous dataframe, and the second is using Pinecone. Both approaches use the cosine similarity metric.

The helper function get_top_N_images generates similar images for the two scenarios illustrated in the workflow above: text-to-image search or image-to-image search.

Let’s understand how we perform the recommendation.

→ The user provides either a text or an image as a search criterion, but the model performs a text-to-image search by default.

→ In line 17, a cosine similarity is performed between each image vector and the user’s input vector.

→ Finally, in line 24, sort the result based on the similarity score in descending order, and we return the most similar images by excluding the first one corresponding to the query itself.

This helper function makes it easy to have a side-by-side visualization of the recommended images. Each image will have the corresponding caption and similarity score.

→ First, the user provides the text that is used for the search.

→ Second, we run a similarity search.

→ Third, we plot the images recommended by the algorithm.

Query: actor arrives for the premiere of the film

Line 9 produces the plot below. 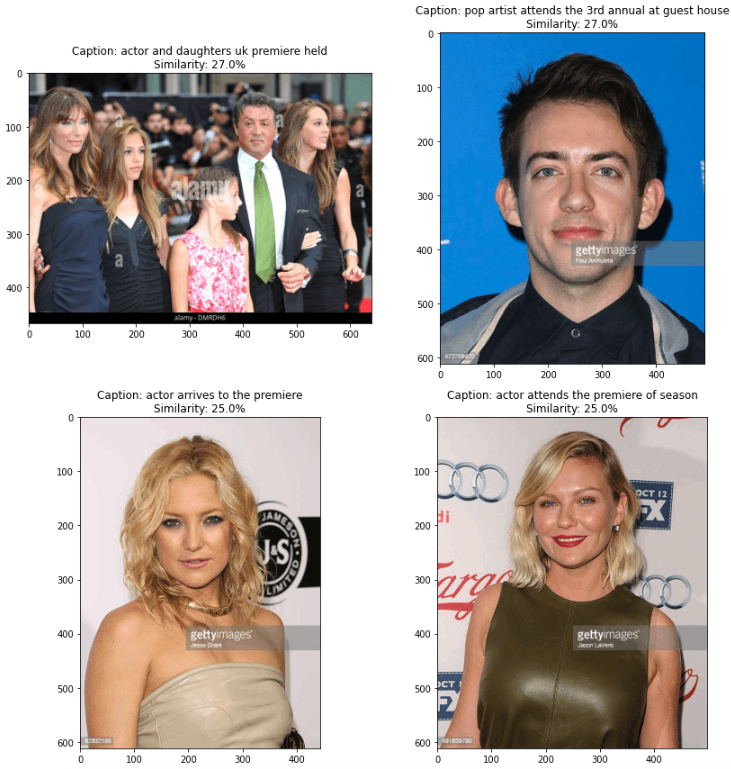 Images corresponding to the text: “actor arrives for the premiere of the film”

The same process applies. The only difference this time is that the user provides an image instead of a caption. 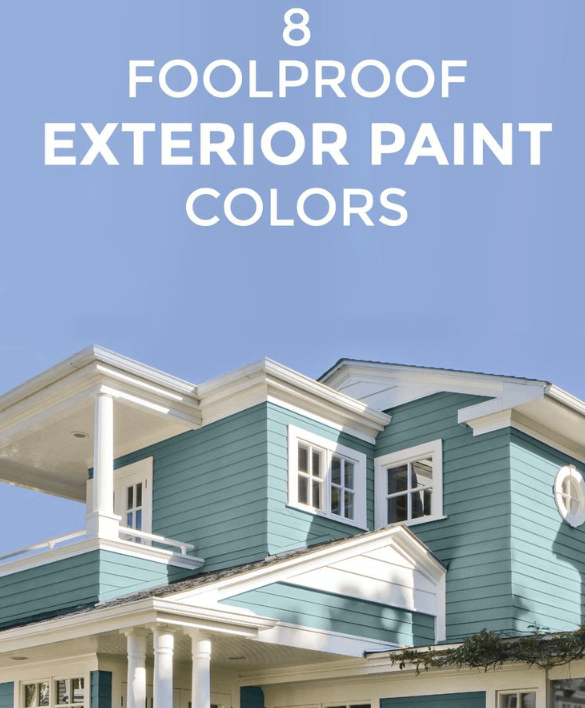 Original image of search (image at the index)

We run the search by specifying the search_criterion which is “image” in line 2.

The final result is shown below. 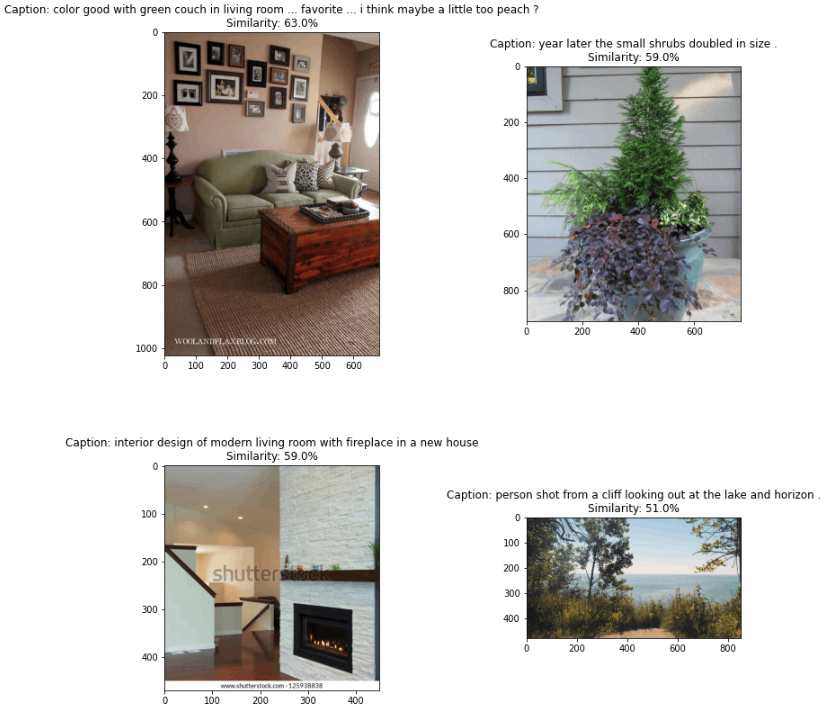 Images corresponding to the image-to-image search (Image by Author)

We can observe that some of the images are less similar which introduces noise in the recommendation. We can reduce that noise by specifying a threshold level of similarity. For instance, consider all the images with at least 60% similarity.

Leveraging the power of a managed vector index using Pinecone

This section will walk you through the steps from acquiring your API credentials to implementing the search engine.

Below are the eight steps to acquire your API credentials, starting from the Pinecone website. 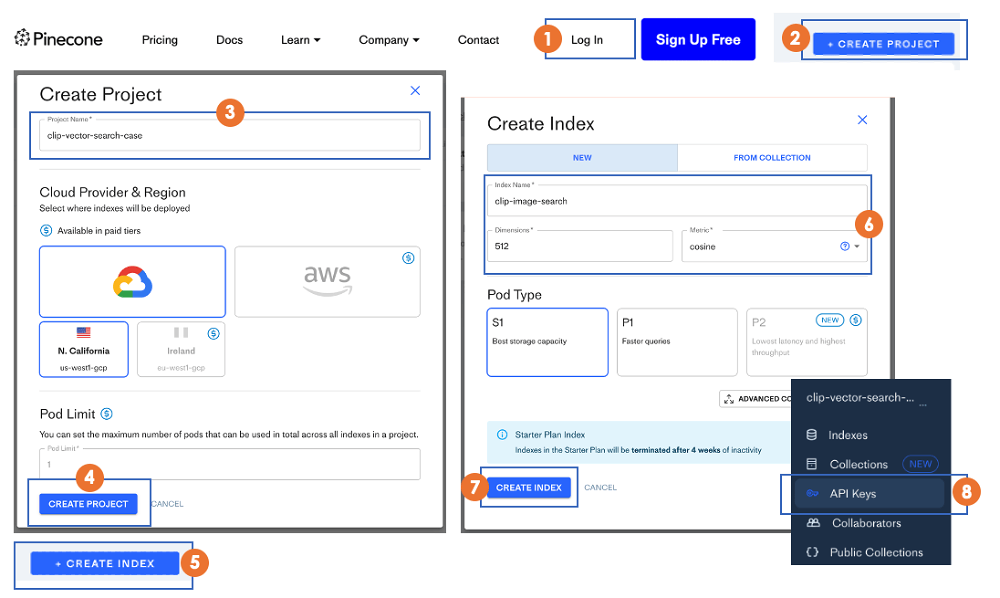 From the API, we can create the index that allows us to perform all the create, update, delete, and insert actions.

The result of the following instruction shows that we have no data in the index.

The only information we have is the dimension, which is 512.

Now that we have configured the Pinecone database, the next step is to populate it with the following code.

Let’s understand what is going on here.

The data to upsert requires three components: the unique identifiers (IDs) of each observation, the list of embeddings being stored, and the metadata containing additional information about the data to store.

→ From lines 5 to 12, the metadata is created by storing the “ID”, “caption” and “URL” of each observation.

→ On lines 14 and 15, we generate a list of IDs, and convert the embeddings into a list of lists.

→ Then, we create a list of dictionaries mapping the IDs, embeddings, and metadata.

→ The final data is upserted to the index with the .upsert() function.

Similarly to the previous scenario, we can check that all vectors have been upserted via my_index.describe_index_stats().

All that remains is to query our index using the text-to-image and image-to-image searches. Both will use the following syntax:

→ my_query_embedding is the embedding (as a list) of the query (caption or image) provided by the user.

→ N corresponds to the top number of results to return.

→ include_metadata=True means that we want the query result to include metadata.

Below is the JSON response returned from the query

From the “matches” attribute, we can observe the top four most similar images returned by the query.

This is the image provided by the user as the search criteria. 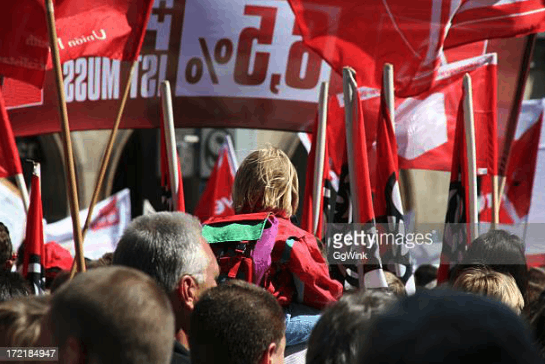 Once you’ve finished don’t forget to delete your index to free up your resources with:

What are the advantages to using a Pinecone over a local pandas dataframe?

→ Simplicity: the querying approach is much simpler than the first approach, where the user has the full responsibility of managing the vector index.

→ Speed: Pinecone approach is faster, which corresponds to most industry requirements.

→ Scalability: vector index hosted on Pinecone is scalable with little-to-no user effort from us. The first approach would become increasingly complex and slow as we scale.

→ Lower chance of information loss: the vector index based on Pinecone is hosted in the cloud with backups and high information security. The first approach is too high risk for production use-cases.

→ Web-service friendly: the result provided by the query is in JSON format and can be consumed by other applications, making it a better fit for web-based applications.

Congratulations, you have just learned how to fully implement an image search application using both image and natural language. I hope the benefits highlighted are valid enough to take your project to the next level using vector databases.

Multiple resources are available at our Learning Center to further your learning.

The source code for the article is available on Colab.