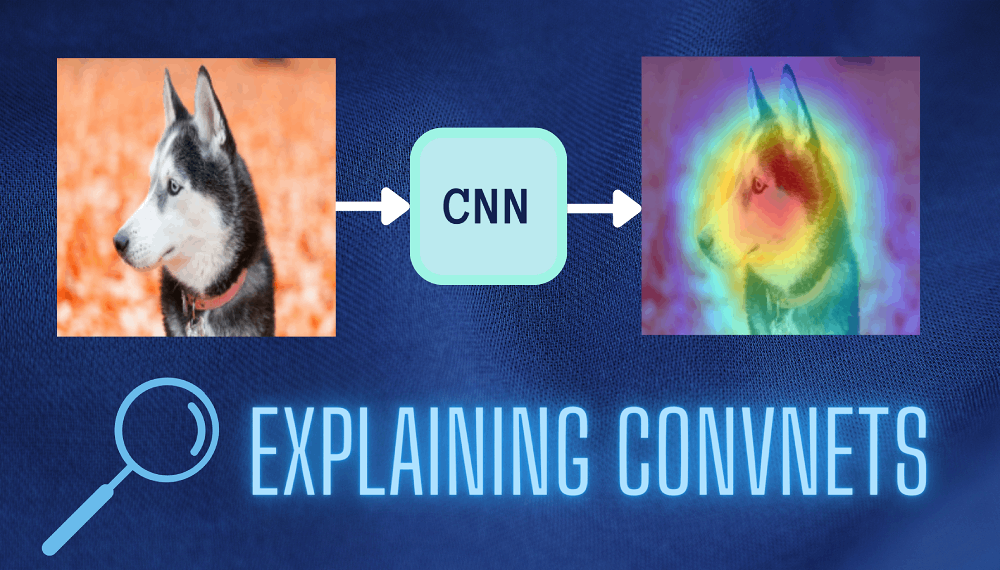 Have you ever used deep learning to solve computer vision tasks? If so, you probably trained a convolutional neural network (ConvNet or CNN) for tasks such as image classification and visual question answering.

But how do you know which parts of the image the network was looking at when it made a prediction? And how do you go from black box to interpretable models?

Adding a layer of explainability to ConvNets can be helpful in applications such as medical imaging for disease prognosis. For example, consider a classification model trained on medical images, namely, brain scans and X-rays, to predict the presence or absence of a medical condition. Ensuring that the model is using the relevant parts of the images for its predictions makes it more trustworthy than a black box model with a high prediction accuracy.

In general, a ConvNet consists of a series of convolutional layers, each consisting of a set of filters, followed by fully connected layers. 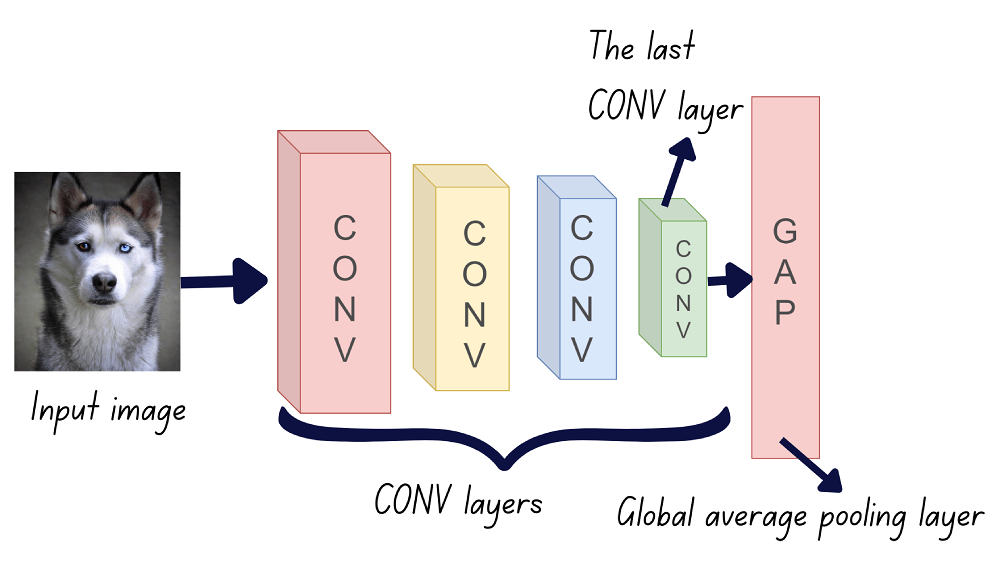 GAP Layer After the Last CONV Layer (Image by the author)

So how do we learn these weights?

Step 1: Apply global average pooling to each of the feature maps. 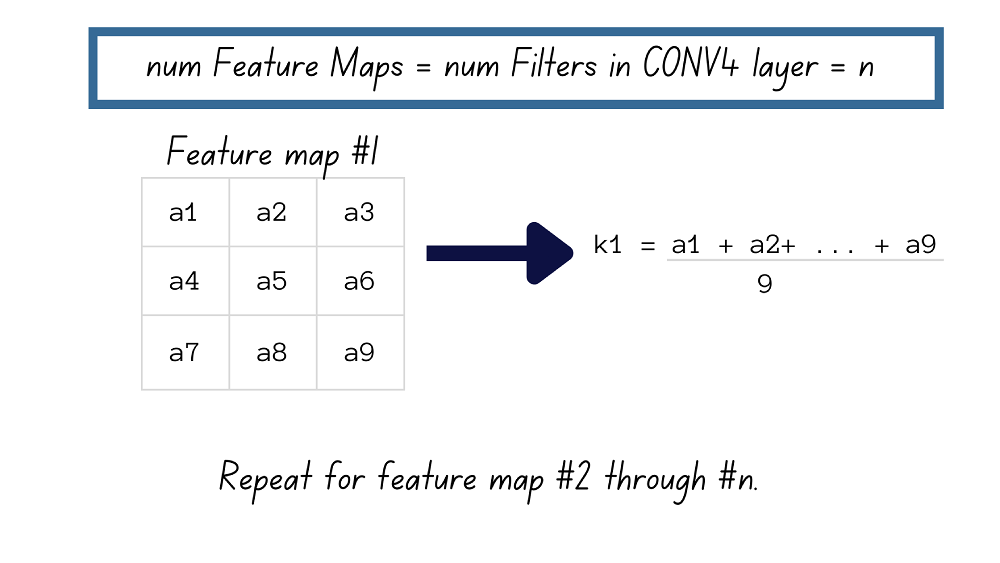 How GAP Works - An Example (Image by the author)

After computing the global average for each of the feature maps, we’ll have n scalars, $k_1, k_2, …, k_n$. Let’s call them GAP outputs. 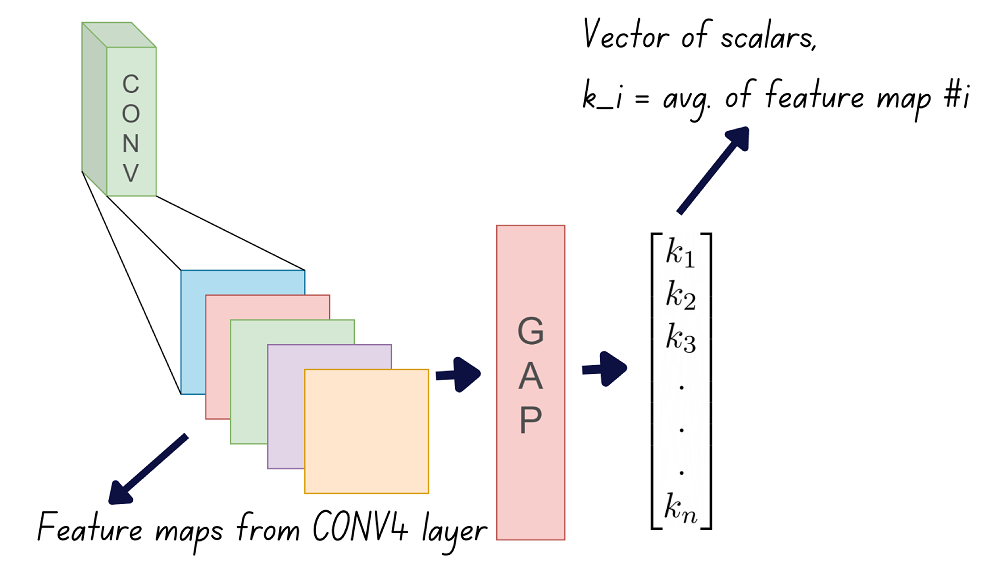 From Feature Maps to Scalars through GAP (Image by the author)

Step 2: The next step is to learn a linear model from these GAP outputs onto the class labels. For each of the N output classes, we should learn a model with weights $w_1, w_2,…,w_n$. Therefore, we’ll have to learn N linear models in all. 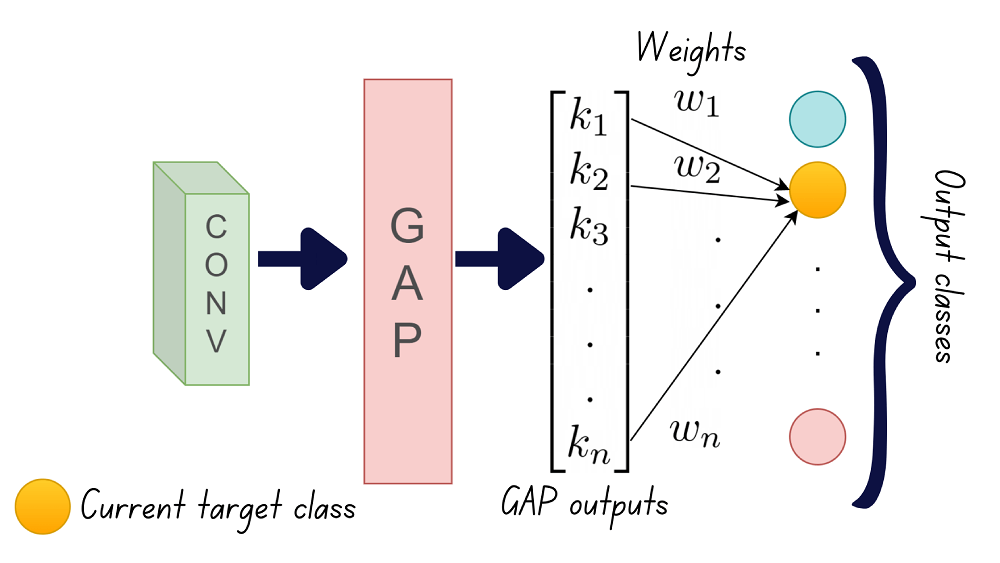 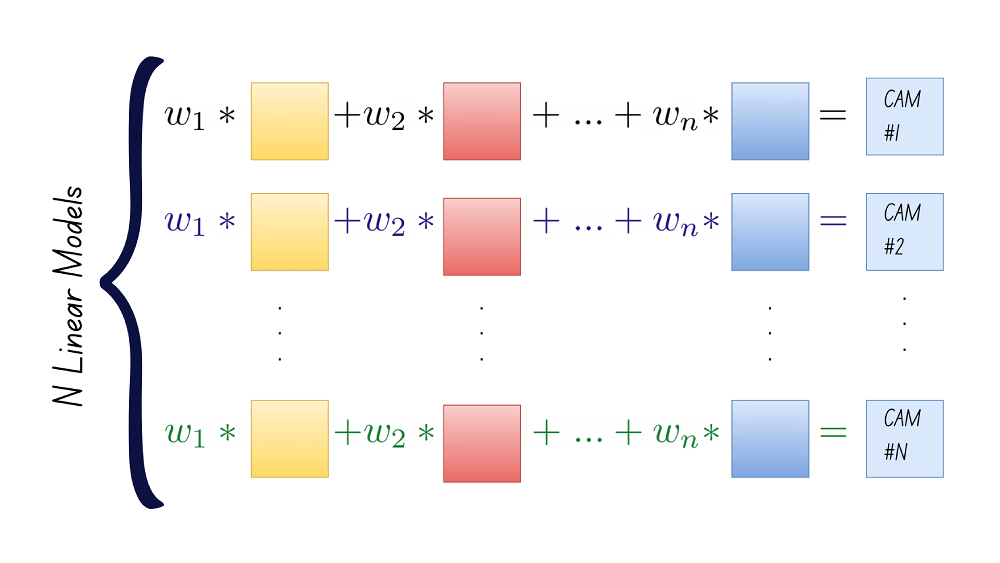 Mathematically, the class score for an output class c in the CAM model is given by:

CAM uses the inherent localization capability of the convolutional layers, so the activation maps can be generated without any positional supervision on the location of the target in the image.

Using class activation maps involves the overhead of learning N linear models to learn the weights $w_1, w_2,…, w_n$ for each of the N classes. Training a ConvNet is a computationally intensive task in itself. This overhead can be a limiting factor when both n, the number of filters in the last convolutional layer, and N, the number of output classes, are especially large.

The introduction of the global average pooling (GAP) layer after the last convolutional layer imposes a restriction on the ConvNet architecture. Though CAM is helpful in explaining the predictions in an image classification task, it cannot be used for computer vision tasks such as visual question answering (VQA). As explained, the GAP layer outputs are scalars that are global averages of the preceding convolutional layer’s feature maps. There is no known performance degradation for image classification. However, this requirement for the GAP layer after the convolutional layers may be too restrictive for tasks like VQA.

As mentioned, the key limitation of CAM is the overhead of learning the weights for linear mapping. Gradient-weighted class activation map (Grad-CAM) is a generalization to CAM that overcomes this limitation.

Let’s start by making a simple substitution in the equation for output class score $y^c$ in CAM.

Next, let’s compute the derivative of the output class score with respect to the pixels $A_{i,j}$ in the feature map.

Summing the above quantities over all the pixels in the feature map, we have the following:

As seen in the above equation, the weights $w_k$ evaluate to the gradient of the output score with respect to the kth feature map. This means there’s no need to retrain N linear models to learn the weights!

We’ve summed over all pixel locations (i,j). Adding the normalization factor 1/Z back in, we get:

In essence, Grad-CAM uses the global average of the gradients flowing into the feature maps of the last convolutional layer. 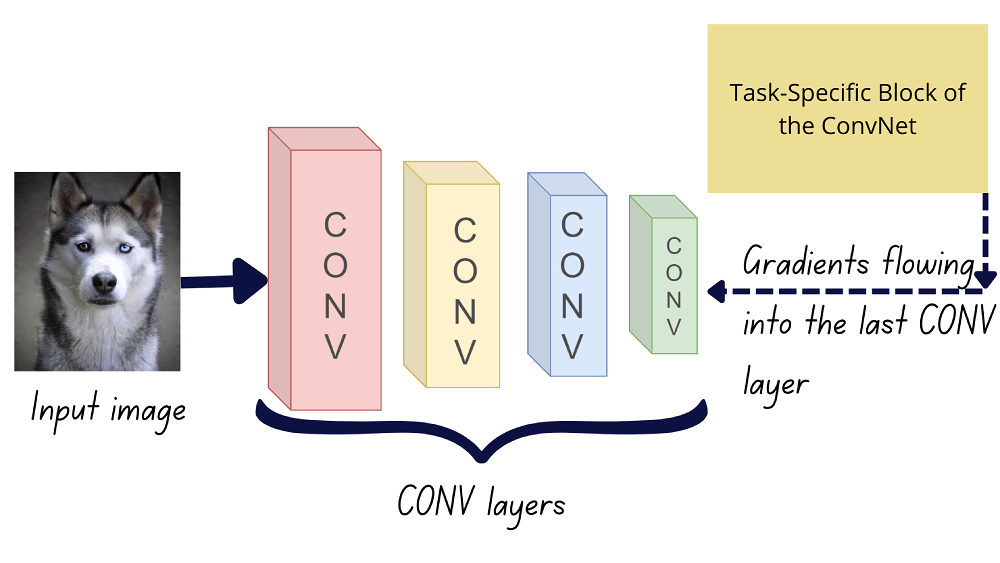 How Grad-CAM Works (Image by the author)

To retain only the positive correlations in the final activation map, we apply the ReLU function on the weighted combination of feature maps.

Given that the gradients of the output with respect to the feature maps identify salient patches in the image, what do negative gradients signify?

Using negative gradients in the weights will give those patches in the image that adversarially affect a particular prediction. For example, in an image containing a cat and a dog, if the target class is cat, then the pixel patch corresponding to the dog class affects prediction.

Therefore, by identifying and removing these patches from the images, we can suppress the adversarial effect on prediction. As a result, the confidence of prediction increases.

Even though Grad-CAM provides activation maps with good target localization, it fails to capture certain minute details. Pixel-space gradient visualization techniques, which were used in earlier approaches to explainability, can provide more granular information on which pixels have the most influence.

To obtain a detailed activation map, especially to understand misclassifications among similar classes, we can use guided backpropagation in conjunction with Grad-CAM. This approach is called guided Grad-CAM.

The concept of guided backpropagation was introduced in [2]. Given a feedforward neural network, the influence of an input x_j on a hidden layer unit h_i is given by the gradient of h_i with respect to x_j. This gradient can be interpreted as follows:

So to understand the fine-grained details, we only backpropagate along the path with positive gradients. Since this approach uses information from higher layers during the backprop, it’s called guided backpropagation.

Grad-CAM++ provides better localization when the targets have a low spatial footprint in the images.

Let’s start by reviewing the equation for the Grad-CAM weights.

From the above equation, we see that Grad-CAM scales all pixel gradients $\frac{\partial{y^c}}{\partial{{A_{ij}}^k}}$ by the same factor 1/Z. This means that each pixel gradient has the same significance in generating the final activation map. However, in images where the target has a low spatial footprint, the pixel gradients that actually help the prediction should have greater significance.

To achieve this, Grad-CAM++ proposes the following:

Mathematically, this can be expressed as:

Applying the ReLU function on the gradients ensures that only the gradients that have a positive contribution to the class prediction are retained.

Working out the math like we did for Grad-CAM, the values of $\alpha_{ij}$ can be given by the following closed-form expression:

The output activation map is given by:

How to Generate Class Activation Maps in PyTorch

The PyTorch Library for CAM Methods by Jacob Gildenblat and contributors on GitHub has ready-to-use PyTorch implementations of Grad-CAM, Grad-CAM++, EigenCAM, and much more. This library grad-cam is available as a PyPI package that you can install using pip.

You can customize this generic CAM example depending on the computer vision task to which you’d like to add explainability. Let’s start by importing the necessary modules.

Next, we import the necessary classes from the grad_cam library.

In this example, we’ll use the pre-trained ResNet50 model from the PyTorch Torchvision library that contains datasets and pre-trained models. We then define the target class, the layer after which we’d like to generate the activation map. In this example, we’ve used the following ImageNet classes: Goldfish, Siberian Husky, and Mushroom.

We can instantiate the model, preprocess the image, generate and display the class activation map.

We can interpret the class activation map as a heatmap in which the regions in red are the most salient for a particular prediction, and the regions in blue are the least salient. 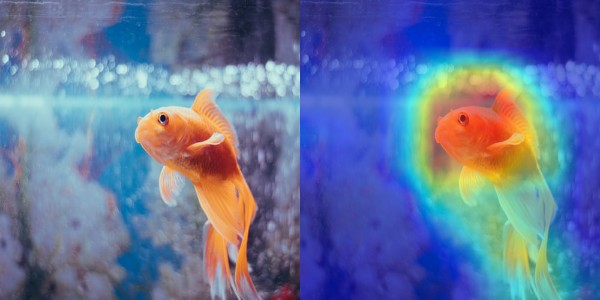 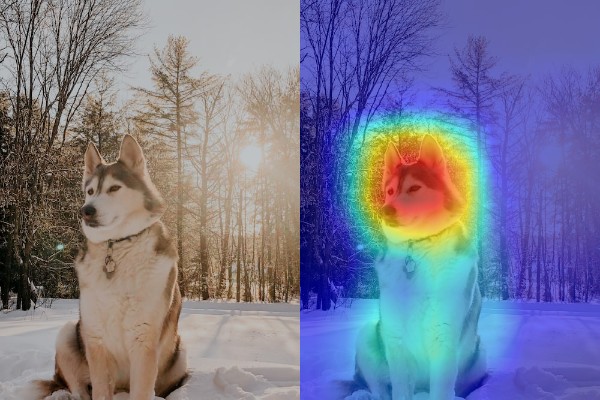 So far, the targets were present only once in the entire image. Now, consider the following image with many small mushrooms, each having a very small spatial footprint. 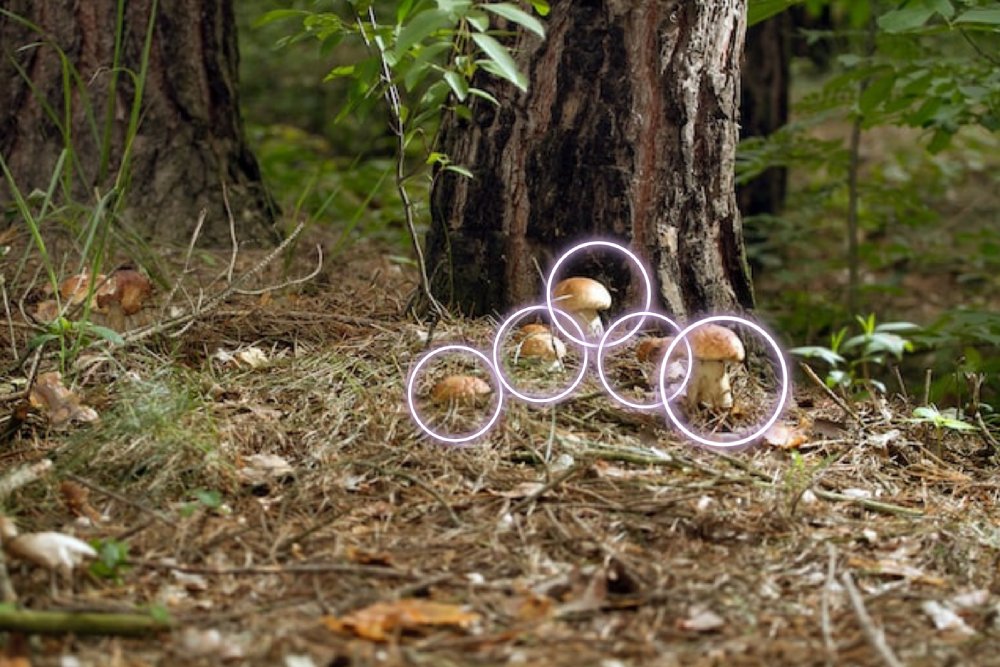 In this case, the activation map generated using GradCAM++ better identifies all instances of mushroom than the one from GradCAM. 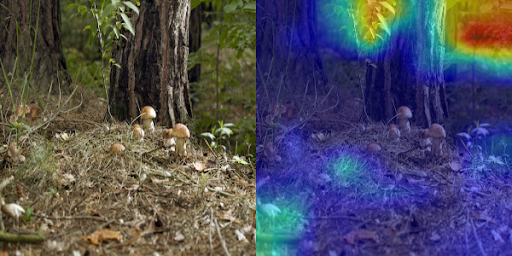 As a next step, you can try generating activation maps for any class or other vision task of your choice.

I hope you enjoyed this tutorial on explaining ConvNets with activation maps. Here’s a summary of what you’ve learned.

If you’d like to delve deeper, consider checking out the resources below. Happy learning!

[2] Springenberg and Dosovitskiy et al., Striving for Simplicity: The All Convolutional Net, ICLR 2015