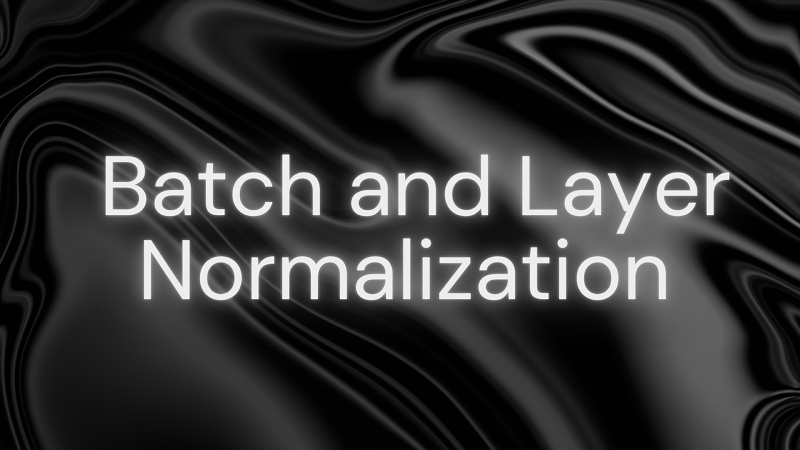 Even with the optimal model architecture, how the model is trained can make the difference between a phenomenal success or a scorching failure.

For example, take weight initialization: In the process of training a neural network, we initialize the weights which are then updated as the training proceeds. For a certain random initialization, the outputs from one or more of the intermediate layers can be abnormally large. This leads to instability in the training process, which means the network will not learn anything useful during training.

Batch and layer normalization are two strategies for training neural networks faster, without having to be overly cautious with initialization and other regularization techniques.

In this tutorial, we’ll go over the need for normalizing inputs to the neural network and then proceed to learn the techniques of batch and layer normalization.

Why Should You Normalize Inputs in a Neural Network?

When you train a neural network on a dataset, the numeric input features could take on values in potentially different ranges. For example, if you’re working with a dataset of student loans with the age of the student and the tuition as two input features, the two values are on totally different scales. While the age of a student will have a median value in the range 18 to 25 years, the tuition could take on values in the range \$20K - \$50K for a given academic year.

If you proceed to train your model on such datasets with input features on different scales, you’ll notice that the neural network takes significantly longer to train because the gradient descent algorithm takes longer to converge when the input features are not all on the same scale. Additionally, such high values can also propagate through the layers of the network leading to the accumulation of large error gradients that make the training process unstable, called the problem of exploding gradients.

To overcome the above-mentioned issues of longer training time and instability, you should consider preprocessing your input data ahead of training. Preprocessing techniques such as normalization and standardization transform the input data to be on the same scale.

Normalization works by mapping all values of a feature to be in the range [0,1] using the transformation:

Standardization, on the other hand, transforms the input values such that they follow a normal distribution with zero mean and unit variance (unit Gaussian). Mathematically, the transformation on the data points in a distrbution with mean μ and standard deviation σ is given by:

But why does this hamper the training process?

For each batch in the input dataset, the mini-batch gradient descent algorithm runs its updates. It updates the weights and biases (parameters) of the neural network so as to fit to the distribution seen at the input to the specific layer for the current batch.

However, if we transpose the idea of normalizing the inputs to the hidden layers in the network, we can potentially overcome the limitations imposed by exploding activations and fluctuating distributions at the layer’s input. Batch normalization helps us achieve this, one mini-batch at a time, to accelerate the training process.

What is Batch Normalization?

For any hidden layer h, we pass the inputs through a non-linear activation to get the output. For every neuron (activation) in a particular layer, we can force the pre-activations to have zero mean and unit standard deviation. This can be achieved by subtracting the mean from each of the input features across the mini-batch and dividing by the standard deviation.

Following the output of the layer k-1, we can add a layer that performs this normalization operation across the mini-batch so that the pre-activations at layer k are unit Gaussians. The figure below illustrates this. 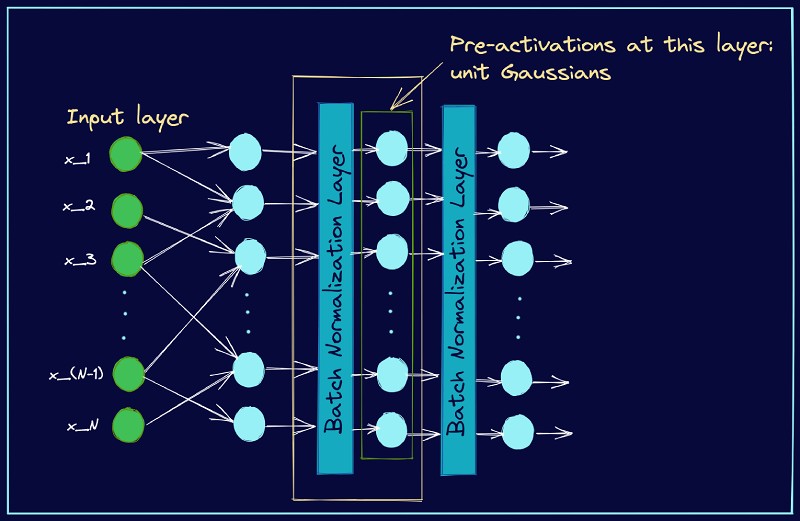 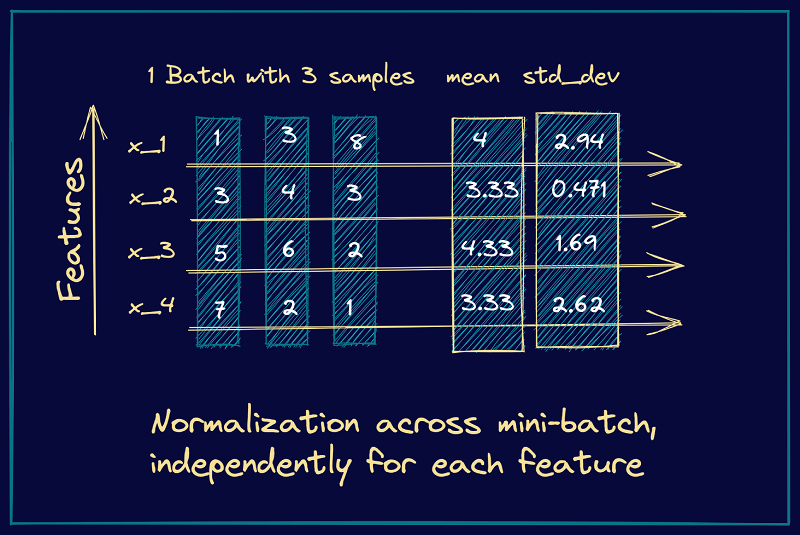 How Batch Normalization Works - An Example (Image by the author)

However, forcing all the pre-activations to be zero and unit standard deviation across all batches can be too restrictive. It may be the case that the fluctuant distributions are necessary for the network to learn certain classes better.

To address this, batch normalization introduces two parameters: a scaling factor gamma (γ) and an offset beta (β). These are learnable parameters, so if the fluctuation in input distribution is necessary for the neural network to learn a certain class better, then the network learns the optimal values of gamma and beta for each mini-batch. The gamma and beta are learnable such that it’s possible to go back from the normalized pre-activations to the actual distributions that the pre-activations follow.

Putting it all together, we have the following steps for batch normalization. If x(k) is the pre-activation corresponding to the k-th neuron in a layer, we denote it by x to simplify notation.

How to Add a Batch Normalization Layer in Keras

What is Layer Normalization?

Layer Normalization was proposed by researchers Jimmy Lei Ba, Jamie Ryan Kiros, and Geoffrey E. Hinton. In layer normalization, all neurons in a particular layer effectively have the same distribution across all features for a given input.

Normalizing across all features but for each of the inputs to a specific layer removes the dependence on batches. This makes layer normalization well suited for sequence models such as transformers and recurrent neural networks (RNNs) that were popular in the pre-transformer era.

Here’s an example showing the computation of the mean and variance for layer normalization. We consider the example of a mini-batch containing three input samples, each with four features. 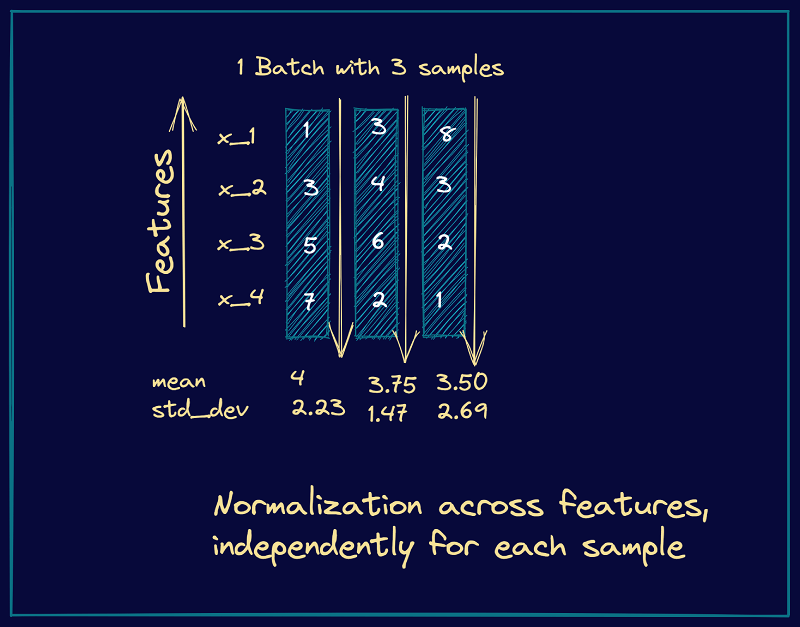 How Layer Normalization Works - An Example (Image by the author)

From these steps, we see that they’re similar to the steps we had in batch normalization. However, instead of the batch statistics, we use the mean and variance corresponding to specific input to the neurons in a particular layer, say k. This is equivalent to normalizing the output vector from the layer k-1.

How to Add a Layer Normalization in Keras

To understand how layer normalization is used in transformers, consider reading this TensorFlow tutorial on transformer models for language understanding.

So far, we learned how batch and layer normalization work. Let’s summarize the key differences between the two techniques.

In this tutorial, you learned the basics of and differences between batch and layer normalization techniques and how to implement them in Keras.